Herbert Hoover apologizes for the difficulties in appointing a State Food Administrator for Virginia.

I am very sorry to see you annoyed over the matter of appointment of a State Food Administrator in Virginia.

In our usual method of these appointments, we asked the Governor to suggest several men. We then submitted these names to the Virginia delegation in Washington and found that they approved of two of the Governor’s nominees. Both of these gentlemen, however, were unable for one reason or another to accept.

The third did not meet the approval of the Virginia Senators and Congressmen. The delegation in turn recommended a fourth man, with regard to whom we again approached the Governor, and in consequence created this storm.

We are now endeavoring to find another list of men on whom we can get approval on all sides before submitting them to you.

The Governor of Virginia does not apparently cooperate very much with the Congressional delegation. We will, however, try to solve the matter without friction. 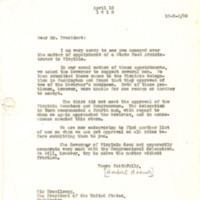