Herbert Hoover asks Woodrow Wilson to approach Edith Wilson about being the first American woman to sign the enclosed card. Every American woman would be asked to signed one of the cards.

We are asking all the women in the United States to sign one of the enclosed cards. It would help us to an enormous degree if Mrs. Wilson would be the first person to sign because it would inspire the American women as nothing else would do. I feel some delicacy in the matter and am wondering if you would consider it likely to cause any embarrassment, and if you think not, would you be so good as to approach Mrs. Wilson with it. I would also like to know whether she would object to publication of the fact that she had done so.

The propaganda along this line is already having tremendous effect. You will notice that the card is not so binding as to cause anyone any great embarrassment in its execution. 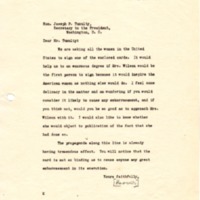