Herbert Hoover tells Joseph Tumulty that the government should release a statement about the embargo limiting food exports in order to maintain food levels at home.

I understand that the Executive Order will come out today with regard to the embargo, and it seems to me very desirable that some sort of statement should be made from the White House to the Press in connection with its operations.

This should be made on the general lines that the embargo is not a prohibition to export foodstuffs or any other commodity, but simply a limitation of such exports to such people who have been granted licenses to so export. That the Government is anxious to determine what our available remaining supplies are as to wheat and corn and their products from out of the old harvest and that this survey will be taken in hand by the Agricultural Department as quickly as the food survey bill passes Congress. It should also be made known that the Government wants to know from each of the countries exporting these materials from this country, what their purchases are in the United States; where they are and what their needs are, in order that we may adjust these things as far as possible in connection with our own supplies. The statement should also include that it appears that so much wheat and corn had been purchased by foreign powers as to embarrass our local consumers--as witness the very high price of cash wheat and corn--and that this embarrassment is not only working great hardship on our own people, but is having a great many indirect evil effects. Cattle are being driven to the markets because of the cost of feed grains, and injury is being done to our dairy industry. The price of old wheat is so high that the price of flour is intolerable to a great mass of our people, and that before licenses will be granted for the export of those products, the Government will require a complete disclosure of all operations by foreign powers.

The Allies have already placed this information in the hands of the Government and that arrangements will be made for their continued supply temporarily, pending adjustment of the whole problem; that the high prices which have made themselves evident has caused a scarcity in supplies and we must safeguard the position of our own people while we make every endeavor to supply the whole world with foodstuffs. That the embargo is not designed to place anyone in difficulties but to get proper correlation on all sides. 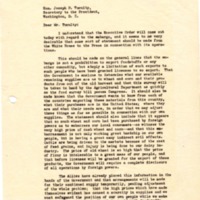