Section of a cablegram from Siberia that describes executions by Russian general.

“ Paragraph 5. General Kalmikof vacancy the Usuri Cossack and on duty in Khabarovsk has been executing quite a number Russians. Probably last three months 100 have been killed. I believe these executions to be a disgrace to civilization and Colonel Styer at Khabarovsk being constantly appealed to for help. Kalmikof stated in his speech to the Usuri Cossacks about a month ago that he had received moral and material aid from the Japanese. I took matter up with Japan about two weeks ago and informed them what Kalmikof had said and protested these executions. They then told me they had helped Kalmikof when we were operating in that section of the country and they would see that he stopped executions. On the 17th he killed at least 10 more and left their bodies quite near where American Troops are quartered and the bodies were being eaten by dogs. Again the people appealed to Colonel Styer to help them give decent burial to their relatives. Colonel Styer took the matter up with Japanese commander and I took the matter up with Japanese here. They have both assured us that such force as necessary will be used in future to prevent executions by Kalmikof. The Russians claim that Kalmikof is being paid by Japanese and is an ally and they can do nothing with him. General Ivanoff stated that he was going to arrest him but I do not think that he will. All factions of the Russians seem to be very bitter against Kalmikof and they freely claim to me that he is a disturbing element in this section of the country and that they cannot understand why our allies will support man of this character. These representations have been made by me to Japanese. It is my belief that executions will stop at Khabarovsk but will be carried on in some other part of Cossack Territory under charge of Kalminof. 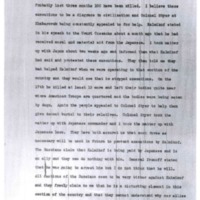