Redfield writes to the president about the creation of an auxiliary census division which will compile statistics on African American labor.

You have referred to me for consideration a letter addressed to you by Thomas Wallace Swann, submitting a proposition for the organization of an Auxiliary Federal Census Bureau.

I find on reading Mr. Swann's statement and the draft of the bill that accompanies it, that the proposed bureau will not be connected in any way with the existing Bureau of the Census, and in fact, will not even be in this Department, but will be under the direction of the Secretary of the Treasury, who is to be ex officio "a member and chairman" of the bureau. In view of that fact it might be proper that Mr. Swann's proposal should also be submitted to the Secretary of the Treasury.

The purpose of the new bureau is not defined in the bill but in the introductory statement is said to be that "of making a complete and general Survey which will clearly illustrate the bearing of Negro labor and its scientific relation to the general economic, industrial, and sociological progress of the United States." In this connection I will call your attention to the fact that the Bureau of the Census in this Department is about to publish a comprehensive report on "Negroes in the United States," which will bring together in one volume all the data relating to the Negroes contained in the various census reports and also a considerable amount of data not previously tabulated or published, bearing upon the economic, educational, and social conditions among the Negroes.

I do not mean to imply, however, that this publication covers the same ground as the investigation contemplated by Mr. Swann, but if any new investigation is necessary and justifiable it seems to me that, in the interests of economy and efficiency, it should be assigned to some one of the governmental bureaus already organized for the conduct of statistical inquiries. The Bureau of Labor Statistics, for instance, would seem to be especially fitted and equipped for conducting such an investigation. I am, therefore, of the opinion that the organization of the new bureau proposed by Mr. Swann is unnecessary and inadvisable. 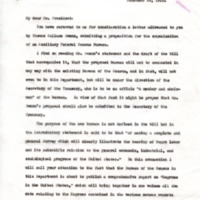