His Excellency: Woodrow Wilson.
The president of the United States of America.

While I am A republican and supported my party in the recent political struggle which resulted in your re-election, I am none the less A supporter of our re-elected president in the uplift of the people here in America; and especially, those who are the most oppressed in this Gospel land and Bible teaching people.

I beg leave at this time to call your attention to the most sacred but disrespected principals of the Constitution of these United States which governs the people of America.
FIRST, The Constitution guarantees equal protection to all the inhabitants throughout the land; and whereas the said Constitution so plainly stipulates that no State shall make or inforce any law which shall abridge the rights or immunities of the citizens of the United States, nor shall any State deprive any person of liberty or property without due process of the law; nor deny any person within its jurisdiction equal protection of the laws.
SECONDLY, The Colored American citizens of these United States of America living within the jurisdiction of the said Constitution of the said United States; have had, and is now having their rights and their protection to which they are entitled as citizens of the United States abridged, in every respect as herein mentioned.
We are disfranchised, We are segregated, We are having our properties destroyed and taken from us without due process of law, We are having the lives of our love ones taken in the most brutal forms before our eyes and we are helpless in the defense of our selves or our own.
In the last thirty years more than four thousand American citizens have been hung, tarred and feathered, cut to pieces, they have been used as fuel for human bonfires, under both republican and demorcratic administrations. The Missionaries who have visited the most savaged countries can tell of no worse savagery among human beings as are being committed in the face of legislated laws of a Christian Nation. (U.S.A.)
In the name of the Almighty God, and for the sake of his Son who died that all men might have a right to life, for the sake of morals, the uplift of humanity and the preservation of the sacred principal of this Government; I appeal to his Excellency: that he (Pres, Woodrow Wilson) urge the passage of such a bill as will eliminate these dreadful wrongs, and which will protected the unprotected citizens of the United States of America.

When there will be no more lynching of American citizens at home, America will be more justifiable in her foreign mission work.
We pray that there may be no more segregation of American citizens, no more jimCrowism, no more disfranchisement, no more North and no more black or white; but just one Godfearing American Nation, loving and uplifting all that is right, and despising and casting down all that is wrong.

The service's rendered this Country by the Colored man clearly demonstrates the fact that he loves his country, and that he desires the love, respect and the protection such as are guaranteed all Americans at home or abroad.

And until he is protected as a citizen of these United States, Americanism means nothing..and America is unsafe; for no man can boast of having saved his house until he shall have saved all within his house.

I beg you to not think it too burdensome to give this letter a portion of your very valuable consideration, time, and space in your New years message to Congress providing it may meet with the approval of wise and impartial judgement.

I enclose herewith my very best wishes to you and yours that you may have a merry Christmas a happy New Year, and the most prosperous term of administration ever given to the American Government.

I am yours for good Government, 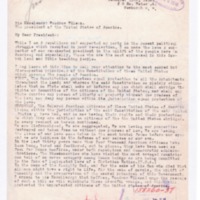