Information on Germany from the British Ambassador to Switzerland

Information on Germany from the British Ambassador to Switzerland

PARAPHRASE OF A TELEGRAM FROM THE BRITISH MINISTER AT BERNE TO THE FOREIGN OFFICE.
Dated October 17.

On October 16, on the eve of my leaving for home, I had a long discussion with the President.

The President started the conversation by offering his congratulations on the recent great Allied successes, and remarked with obvious satisfaction that things were going excellently for us. The Germans had been definitely defeated in the field and further aggressive efforts would be impossible for them to undertake. I may add that I know this to be the view of the Chief of the Swiss General Staff, being largely based on the reports made to him by a Swiss officer who about two weeks ago was with the Germans on the Chemin des Dames.

The President spoke of President Wilson’s answer to Germany and said that he felt pretty sure that Germany would give way if the abdication of the Emperor and the Crown Prince were eventually to be demanded by the Allies. At the present moment the Hohenzollerns were being generally criticized in Germany. The President added that the democratization of Germany was absolutely essential, with a general sweeping away of the whole caste of Ludendorfs, Junkers, etc. In this event Switzerland for many years to come would have no cause to be afraid of Germany, either from a military or political point of view. He feared, however, that Switzerland would be over-run by Germans after the war ended, as they would not find it possible to go to any of the countries of the Entente. The Germans were now regarded everywhere with such hatred that neutral countries would be their only outlet. 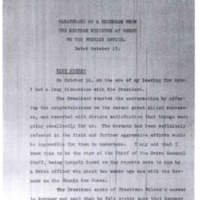