Status of the Negro Problem at Newport News

Status of the Negro Problem at Newport News

Inflammatory report on what the author thinks the African American troops in Newport News really think.

While the situation at Newport News has greatly improved, there is still great danger that trouble may arise before the war is closed. Unfortunately the true attitude of the negro remains unseen. He must not be judged so much by what he says publicly, as by what he is thinking and doing in secret. This tendency towards secrecy is growing. The negroes are not telling the white men all the truth about what they think of present conditions, and what they expect when the war is over.

To appreciate the present situation and to guess what the future will bring, it is necessary to know some of the things he is thinking, and why he is thinking thus:

(a) They are very uneasy about the future. All are looking for a coming democracy in which the negroes will occupy a high position. This talk may be heard in street cars, on street corners and almost any place where two or three of them get together. The details of this democracy they do not discuss. It is enough for them that they are coming to their own. They grow uneasy when the thought occurs to them, that coming kingdoms do not always appear.

(b) They demand a better chance, industrially, socially, and politically; they complain bitterly of a white man’s oppression. They feel they have been discriminated against long enough. They say further that no sacrifice is too great to win a freedom, which was not gained by the Civil War. Here again is no attempt to state clearly what they want. As an illustration of this feeling, here are the exact words of a negro, with almost national reputation: “I come to the problem, with no race prejudice. My best friends in this world are white men. I have spent my life in trying to bring about a more friendly relation between the whites and the blacks. The negroes are not free to-day and have never been. I do not want them to have that for which they are not prepared, but I do want them to have a chance as human beings. If this war does not bring this chance, there is no hope, and I, for one, will feel that another course is necessary.”

(c) There is a mistrust of the government. They feel that certain things could be accomplished, if the government would take a definite stand. Too many of them look upon the government as unfriendly, and seeking to do them harm, rather than look after their interests. For instance some of the women here will not engage in war service because they say it is a trick of the government’s to get them into oversea service. Many of the mothers would not let their girls participate in our program for the same reason. They believe that as soon as they learn to do work here, they will be made to work over there. They speak often of the strong arm of the government.

(d) There is a widespread feeling, that negro troops are discriminated against and badly treated. They point to the attitude of some white officers, and regard that attitude as typical. They love to linger on isolated cases. Locally, this condition is improved, because some of them have learned that white men are subject to the same treatment and that after all bad treatment comes from individuals and not the government.

(e) There is a growing dissatisfaction that so many negroes are among the stevedores and Labor Units. They believe that there is a deliberate attempt to put the hard and nasty side of army life on the negro. I am told that this feeling is nation-wide.

(f) They want the mob-spirit put down. They point to the fact that lynching and brutal treatment of negroes has been increased, since we entered the war. Apparently our President’s recent utterance on the mob-spirit is doing good. Many local people have expressed great satisfaction.

(g) The most discouraging thing to me here is the fact that many ministers are preaching, and prominent men sent here are lecturing that the war cannot be won without the negroes. Time and again have they said in my hearing that the United States was failing, and had to call upon the negroes to win the war. When such utterances are made, whether in church or out, prolonged applause follows. With these men this is not idle talk. They believe it is actually so. This fact accounts for much of their arrogance and furnishes a reason for demanding great things when the conflict is over. 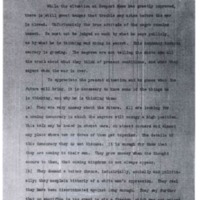