Finding aid for a collection of letters from a soldier serving as a journalist with Stars & Stripes in France during WWI.

The collection is arranged in 103 folders, in order of their appearance in the original scrapbook.

Adolph S. Ochs Jr., is the central figure of this collection. Having been raised in a family that was influential in the newspaper industry, Ochs was put in charge of the finances of The Stars and Stripes, the newspaper of the American Expeditionary Forces, in Paris for the duration of World War I. After Armistice, Ochs was involved in the ousting of the head of the S-A-S, Captain Guy T. Viskniskki, and for his role in this fiasco he was removed from duty at the S-A-S and transferred to a military police job elsewhere in France. Other important figures in the collection include Ochs’ father, Colonel Milton B. Ochs, editor of a newspaper in Chattanooga, TN, his uncle Adolph S. Ochs Sr., editor at the New York Times, and his brother, William Van Dyke Ochs. 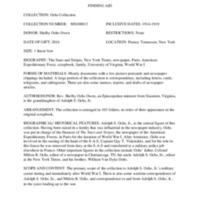