Letter from Adolph S. Ochs Jr. to his father, on the audit of The Stars and Stripes and his role in the paper's bookkeeping.

I have not written you for several days, but I’m sure you’ll understand when I tell you the circumstances.

The morning after the armistice was signed the Inspector General appeared in my office and announced that he was going to make an audit of my books. He was ten days on the job. To keep up with the audit and run my regular business at the same time, was quite the hardest thing I’ve ever had to do. I have fourteen book-keepers working for me now and all of us were busy from 12 to 18 hours a day. One night I did not leave the office at all.

Dad, it was the most beautiful thing in the world - the way those books balanced. The inspector checked me right down to the last [?] - and gave me an absolutely clean slate - not one error in accounting - covering a period of over nine months - not one expenditure that was criticized - not one item that was not covered by a proper receipt. Dad, I’m so proud of it all - so proud of the men who have worked with me - so proud of the little newspaper that began it’s existence with indebtedness of about 25,000 and no circulation and grew to financial strength and a circulation of 401,000 in less than ten months!

I knew that the inspector would not find any deliberate irregularities, but I hardly hoped that he would tell me that he could find no evidence of poor business judgement. The army system of accounting is very strict - and since Waldo left and I have been in complete charge of finances, I haven’t been overconfident.

I am enclosing a recapitulation of my report to the inspector. He tried to find a flaw in it for ten days - and couldn’t.

Responsibility for nearly four million francs - and a clean slate!

That’s a Hellava war record - and not what I came over here for; but it’s worth something and will, in the days to come, take some of the bitterness out of the pill I’ve had to swallow in not having had the opportunity of taking my chances along with the men who have died for a cause. 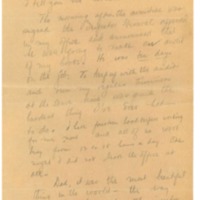