Letter from Adolph S. Ochs Jr. to his family.

I cabled today an answer to your inquiry about Dutch Kline. Hope it has reached you long before this but will jot down here my message

“Crenshaw, Virginia saw Kline few weeks ago. Trying to locate now but expect delay. No cause for worry”

Lewis Crenshaw is the director of the Univ. of Virginia bureau here. He tells me that he saw Dutch not long ago and that he was quite well & happy. Assure Mrs. Kline that she has no cause to worry. Dutch is with a unit that is on the move all the time, and mails are slow enough to and from stationary units. I am trying to get in touch with him and will cable as soon as I hear anything. It’s Crenshaw’s business to keep up with casualties and he would have been the first to know if anything was wrong.

As Mother’s letters sound (over) very worried I’m it a point to cable every week or ten days. I wrote you that the EA.M week-end messages have been suspended. I have to send all my messages by direct cable and they come high so I’ll have to be brief--

Mother please write to Uncle George, Aunt Nannie & Aunt [?] and tell them that I have received their packages & Aunt Nannie wrote that she had not received any acknowledgement. I wrote my thanks for the things she sent ages ago - before leaving the Staff College. I’m afraid my letters to the others may have been lost too - Did I tell you that I got a fine box from Uncle Adolph containing, among other things, a leather coat? I immediately wrote and thanked him - but - perhaps you better say something about it in your next letter

In my last letter from Dad he asked details about my present assignment and didn’t seem to know whether I am on the Editorial staff or the business staff. That seems funny because I have written you all about it so many times. Surely by now you know that I’m the treasurer.

Are you getting the Stars & Stripes regularly? You are on the mailing list for one copy and I will have another sent, as per Dad’s request - one to the office and one to the house.

I’m quite sure the Entergetic godmothers could get us at least 100 subscriptions, but we really don’t need ‘em at present. Only 2750 new subs passed over my desk today. Owing to the white paper problem we are going to have to limit the number of subscribers, allowing only a certain percentage of an organization. My bank [?] 18,000.00 francs. Some little business? The baby has grown beyond the wildest dreams of any of us and is still going strong.

Mother mustn’t worry about the much advertised “big gun. “Bertha” - as we call her, makes a lot of fuss but does little damage. She cracks away now and then but nobody pays any attention to her. The Germans think they have done a cute trick, but it will take a lot more than a longrange Potsdam pop-gun to shake the morale of these wonderful French. A bombardment by Bertha is neither as thrilling nor as dangerous as a Walden’s Ridge thunder storm.

Dad wrote something about Van’s saying I had been in the trenches. I wrote Van that I hoped to go to the trenches soon. But I haven’t been and there seems little prospect of it for some time to come. I have tried to keep you as fully informed of my whereabouts as the regulations will permit, And will continue to do so--

This note has been scribbled hurriedly - in bed - so please indulge accordingly.

Good night, dear ones. From one who knows a little thing or two, take the tip that “we can’t be licked.” Have an unfaltering faith in the strength of our allied Armies. England is fighting. fighting with the most astounding courage. France - after four years of it in her own wounded country - is not discouraged and will see it through to the End.

And I wish I could tell you how many Americans are now up in the lines fighting for you. You must not be impatient Victory will not come in a day. But it will be ours-- 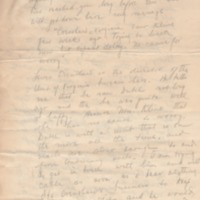