William A. Reid to Woodrow Wilson

William A. Reid to Woodrow Wilson

Thoughtful letter disagreeing with Trotter's methods and trusting that the "episode in question will not be allowed to lessen your sympathy."

Since the recent visit to the White House of the Independent Equal Rights League I have heard such frequent and emphatic expressions of regret among the better element of colored people here in Washington, both in and outside the government service, regarding Mr. Trotter's attitude that I have taken the liberty to write you on the subject.

My conviction right along has been that the conservative and responsible class of colored people are opposed to the seeking of such conferences or the calling of indignation meetings as a means of bringing about race adjustments. Not that we do not have our share of grievances - some real and some exaggerated - but because such tactics are rarely representative of either the cause involved or the majority affected, and in the past seemingly has lost rather than gained friends. Mr. Trotter and his adherents unquestionably represent a following, in my judgment a really menacing element, whose beliefs and propaganda appear to be the outgrowth of certain educational teachings. This and the Negro's inherent tendency to respond so enthusiastically to appeals to his emotions not his judgment or reason, sometimes creates the impression among our white friends that this sort of agitation represents popular sentiment. Nothing could be further from the truth, and it would be a serious injustice to the race as a whole, certainly the dominating element of peace-loving and conservative black people to charge them with either entertaining or sanctioning Mr. Trotter's views or methods.

Booker Washington, whose efforts to lead the race along safe and sane lines, but whose work has been so effectually hampered, if not permanently overthrown by Mr. Trotter and those advocating his theory of race matters, doubtless foresaw all this when he so earnestly appealed to colored men not to stir up agitation against segregation in the government departments. Mr. Washington believes, as most conservative American Negroes believe, that we can more successfully win our way to every consideration of the people of this nation by demonstrating along practical lines our worth to a place among them.

There may be some instances when colored employes in the government service have not received under your administration the consideration they perhaps merit. I myself was dropped from the rolls as a clerk at the Government Printing Office and reinstated as a skilled laborer, although for seven years I had satisfactorily filled the former position. Strangely enough I had supported your candidacy in 1912, a fact (prompted by my former employment and associations at Princeton) which was communicated to you at Sea Girt, and which you expressed appreciation of. But this is bringing politics into the subject and it is my belief that we would progress very much faster if we would keep out of politics altogether for many years to come.

However, we trust, Mr. President, that the episode in question will not be allowed to lessen your sympathy or interest in the colored people, whose loyalty and devotion to the nation we point to with so much pride. 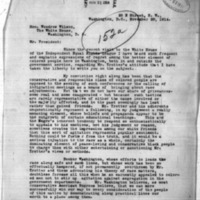