Segregation May Be an Issue

Segregation May Be an Issue

Newspaper clipping about segregation in the federal government departments.

SEGREGATION MAY BE AN ISSUE

WASHINGTON, Nov. 15. –The Trotter incident has indeed fanned the segregation issue into a great blaze--and curiously enough, perhaps, it is not the treatment of Mr. Trotter, but the question of segregation per se which is now the at the center of controversy. The point is made that whatever Mr. Trotter's behavior and words, the case remains as important as it was, and this rather sensational incident has brought it into new relief. In short, the Trotter matter has advertised the matter.

The President said there was no politics in it, and could not be. The opinion of political experts is that he is mistaken in this. Can he keep politics out of it? By saying that he had been informed by officials that the segregation had been started to avoid friction between the races, and not with the object of injuring the negroes,' the President has opened a point to attack, and effective attack. There has been no friction that anyone could discover between the white and black employees, in something like half a century of their working together, until McAdoo, Burleson and one or two others came into power. This “friction” is a new thing. The suspicion is general here that it is handmade. When so staunch a Democratic paper as the New York World, an ardent admirer of Woodrow Wilson, condemns the race situation in the federal departments, it is futile to say that there is no case, or that politics can be kept out of it. This is what the world has to say, editorially, on the matter:-

What “The World” Says.

The bad manners of the chairman of the delegation, however deplorable, are no justification of the policy of Jim-Crow government which certain members of the cabinet have established in their departments; and, as the President well knows, insolent conduct is not confined to the members of any particular race.

“The President should have foreseen this unfortunate issue when Mr. McAdoo and Mr. Burleson were carrying their colorline theories into Democratic government. Mr. Wilson told the committee that there had been no discrimination in the comforts and surroundings of the negro clerks, but explained that he had been informed by officials that the segregation had been started to avoid friction between the races and not with the object of injuring the negroes.' The President failed to explain, nevertheless, why no such rule had been considered necessary until Mr. Burleson and Mr. McAdoo got into the cabinet.

“The President thinks that this is not a political question, but he is wrong. Anything that is unjust, discriminating and un- American in government is certain to be a political question. Servants of the United States Government are servants of the United States Government, regardless of race or color. For several years a negro has been Collector of Internal Revenue in New York. He never found it necessary to segregate the white employees of his department to prevent 'friction'; yet he would have had quite as much right to do so as Mr. McAdoo had to segregate the negro employees of the Treasury in Washington.

"While the Democrats of the country have been trying to solve certain great problems of Government, a few Southern members of the Cabinet have been allowed to exploit their petty local prejudice at the expense of the party's reputation for exact justice.

"Whether the President thinks so or not, the segregation rule was promulgated as a deliberate discrimination against negro employees.

“Worse still, it is a small, mean, petty discrimination, and Mr. Wilson ought to have set his heel upon this presumptuous Jim-Crow government the moment it was established. He ought to set his heel upon it now. It is a reproach to his Administration and to the great political principles which he represents."

Personally, President Wilson has treated the negro clerks well. At the instance of the Secretary of the Treasury, he recently promoted Richard Green, a negro messenger of long and faithful service, to a clerkship, and at the suggestion of Sec. Bryan he similarly promoted Edward Savoy, the Secretary's personal messenger. Both of these promotions required Executive orders. He also nominated a negro to be Registrar of the Treasury, but the nomination stirred up so much hostility among the Southern Senators that the candidate withdrew, and an Indian, Gabe E. Parker, was finally appointed and confirmed. 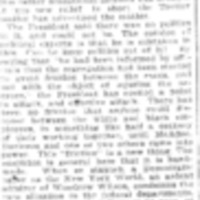