Frederic Delano, President of the American Civic Association, explains the purpose of the
organization to Grayson and asks him to accept membership.

A notice of your nomination to membership in the American Civic Association in recognition of the work which you are doing in the civic field having gone forward to you today, I am sending you this personal note in order to explain the purpose of the officers in electing you to membership.

It is our aim to build up through this selective system a small but powerful group of civic workers from all parts of the country. We are exceedingly desirous of increasing this membership among influential people of the right kind for we believe that we can convince them that we can render a public service with which they will be glad to associate themselves.

Inclosed with your notice of election is a membership slip, from which you may select the type of membership you desire to accept. I need not tell you how much we should value the privilege of adding your name to the group of civic leaders who are already members of the Association, and to serve you regulzarly with the publications issued for their use. 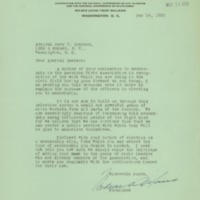