Letters are arranged chronologically within one folder housed in the Small Collections document box.

Secretary of the treasury under President Woodrow Wilson, William Gibbs McAdoo was born on 31 October 1863, in Marietta, Georgia. Leaving the University of Tennessee in 1882, McAdoo took a position as deputy clerk of the U.S. Circuit Court in Chattanooga, where he studied law and passed the bar examination in 1885. That same year, McAdoo married Sarah Houston Fleming, who died in 1912 after the couple had six children. McAdoo built a practice in railroad law and gained expertise in the financial aspects of the industry. After moving to New York City, he spearheaded a campaign to build railroad tunnels under the Hudson River, which were successfully completed in 1909. An active supporter of Woodrow Wilson, McAdoo briefly ran the 1912 presidential campaign and accepted a seat in the new president’s cabinet as secretary of the treasury.

In 1914, McAdoo married Eleanor Randolph Wilson, and, before divorcing in 1934, they had two children. The energetic McAdoo was responsible for a vastly increased economic role for the federal government when he overhauled the nation’s money supply by initiating the Federal Reserve System and implemented reforms such as banking regulation, tariff reform, and a personal income tax. During World War I, McAdoo played a crucial role, engineering massive loans to European powers and initiating successful Liberty Loan campaigns to finance the War. When the government took over the nation’s railroads, McAdoo was appointed director general and served until the end of the War, when he resigned his cabinet positions and returned to legal practice.

Aligning himself with the Democratic party in California, where he had moved, McAdoo pursued nomination for the presidency in 1924 but was not successful, largely due to his close connections with big business; in 1932, McAdoo won election as a U.S. senator, but lost his seat in 1938. Remarried to Doris Cross in 1935, McAdoo died in Washington, DC, on 1 February 1941.

The William Gibbs McAdoo Collection consists of only four letters to his wife Eleanor Randolph Wilson. All are of an intimate nature and are handwritten, mainly in pencil. The first combines details of a business trip with a sentimental love letter. Scholars may be interested in a glimpse of the personal side of this public figure. 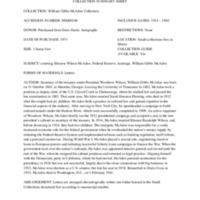