Under date of September 17 you enclosed to me a letter from Dr. Rebecca Lee Dorsey, of Los Angeles, suggesting a plan by which a very large and rapid increase in women nurses in the United States could be brought about. You have doubtless acknowledged Dr. Dorsey's letter, and I have also acknowledged it, thanking her for the suggestion. The purpose of this note, however, is to give you the reassurance which the Surgeon General's office gives me on the subject. The superintendent of the Army Nurse Corps says that there are upwards of eighty thousand graduate nurses in the United States, and that they are graduating from the training schools now at the rate of thirteen thousand yearly, that arrangements have been made by which the length of the usual course has been somewhat shortened, and that large increases in the training classes are taking place by reason of war stimulation, so that an entirely adequate number of nurses is believed to be on hand and in course of training. Should our necessities indicate the need for a more rapid method we will be very glad to consider the adoption of the suggestions which Dr. Dorsey has made. 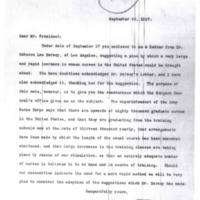