I have your note. Mr. Scott will not resign until it is convenient and meantime we can find a suitable person.

I fancied the Judge had some feeling of the kind suggested from what he said to me when he first came about the publicity of the formation of the War Industries Board, in which Mr. Baruch was named first. 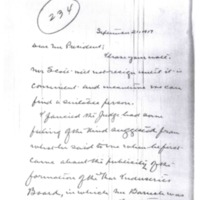