Please deliver copy to the Secretary of State with as little delay as possible.

Paragraph 2 The permanent military advisers yesterday and today carefully considered the question of Japanese intervention in Siberia by their occupation of the Trans-Siberian railroad in behalf of the allies. They adopted joint note number 16 addressed to the Supreme War Council and embodying the following resolution.

Paragraph 3 "The military representatives are of the opinion, first, that the occupation of the Siberian Railroad from Vladivostok to Harbin, together with both terminals, presents military advantages that outweigh any possible political disadvantage. Second, that they recommend this occupation by a Japanese force, after obtaining suitable guarantees from Japan, together with a joint allied commission. Third, the question of the further occupation of the railroad shall be to determine whether or not (Determined by?) the allied governments concerned according(ly) as circumstances develop."Paragraph 4. My comments follow. First, practically the only military advantage from proposed action is securing military supplies at Siberia and Harbin and preventing them being sold to Germans and preventing Germans from using Asiatic coasts for submarine bases. This loses much of its weight since Germany resumed yesterday status of war with Russia. Second, British military men seem to favor combined occupation of Siberian railroad from Vladivostok to Cheliabinsk. A secret memorandum was shown me yesterday by the British military section in which the following views appear. They think it is the last chance of saving Russia for the allies and of preventing withdrawal of German troops from Russian front. By occupying the railroads as far west as Cheliabinsk they hope to consolidate the orderly Russian sentiment in Siberia against the anarchist sentiment. They say that the Japanese have all their plans ready and demand only that the operations should be left to them to execute alone and that they shall not have the humiliation and pin pricks in the shape of allied "Show of Flags" detachments to contend with in obtaining the willing consent of their people. They further say that the Japanese Expeditionary Force will seize Vladivostok and the maritime provinces when they like; that now that the United States are in a fair way to be armed to the teeth a very different complexion is placed on our Japanese question; that although a German domination of Russia and Siberia would be a danger, a German-Japanese domination of the world would be a greater one, and that the latter could probably be avoided by bringing the Japanese out into the open, a course which they have studiously avoided since the beginning of the war. It is evident foregoing views cannot be realized by stopping occupation of railroad at Harbin. However British say movement can be pushed to Cheliabinsk if desired. The question is whether this will play into the hands of the Germans. The latter yesterday resumed status of war against Russia, that is to say against the Bolshevicks. The Germans as the declared enemies of the Bolshevicks may be as likely to consolidate in their own favor the anti-Bolshevick sentiment as the Japanese are to consolidate it in favor of the allies. Again, will inviting Japanese intervention in Siberia "bring the Japanese out into the open" as the British seem to think. May not the Germans make a deal with them as to respective spheres of influence that will give Germany all she wants in Western Russia. Third, the second paragraph of above resolution is based on belief that joint allied forces to occupy Siberian railroads can not be formed. The joint allied mission is to be composed of political and military men who will keep the Governments concerned fully informed.

Paragraph 5 I think that the project of Japanese intervention in Siberia involves possible grave danger and that the resulting purely military advantages will be small. But writing above dispatch I have consulted my English and French Colleagues and I agree with them that some chance must be taken. I believe that all the immediate purely military advantages that can be secured will be obtained by the occupation of Vladivostok. The danger will be minimized if no attempt is made to proceed further than Vladivostok or at the most Harbin until effect on Russian sentiment both Bolshevick and anti-Bolshevick is ascertained.

Bliss.Copy for The Secretary of War. 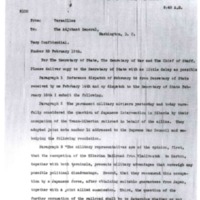