No. 1 CB
From H A E F
To The Adjutant General, Washington.

Number 596, February 12th.
Confidential.
For the Chief of Staff.
Reference paragraph one your 735, British military authorities are in complete accord with the proposals outlined in subparagraphs A and B my cablegram 555. Under these arrangements the personnel with equipment C of four combat two replacement divisions of a corps should be sent......... Conference is in progress with the French military authorities with regard to the necessary artillery and artillery ammunition, wagon transportation and necessary replacements in clothing and equipment except for artillery will be supplied by the British employing their own tonnage. The course of training including tour in front line trenches will cover a period of about ten weeks after which complete divisions will be ready for service in American sector but our own transportation must begin to arrive in France not later than May 15th in our own tonnage to make these divisions ready for service with us. In this connection it is possible that British may be able to furnish us permanently the wagon transportation for all of these troops but reliance should not be placed on this possibility and arrangements for furnishing transportation should be made as above provided, but shipments should be delayed until further notice. French are considering possibility of furnishing draft horses for the artillery and also for other arms. Report will be made later as to their decision. All corps troops not included in the combat and replacement divisions should be sent by our own sea transports in such manner as to complete the corps upon the termination of the training. Second sentence paragraph 2 your 735 "They will join with transportation, machine guns, pistols, artillery etc." reference to transportation not understood. Transportation should be handled as herein indicated. Information requested as to number and type of machine guns contemplated. Recommend advance agents of each division be sent to France ahead of their divisions to arrange necessary details. 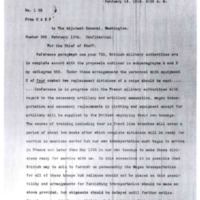