COPY.
July 9, 1917.
PERSONAL.
The enclosed clipping from the Baltimore Sun of July 8th refers to a letter you have written to the American Legal Defence League in answer to a communication from that body protesting against soldiers and militiamen breaking up meetings and arresting citizens etc.
I have wondered if you know what this American Legal Defence League is. It was organized at the instance of George Sylvester Viereck, of the Fatherland, and a lot of Germans, pro-German sympathizers and disloyalists in this country, who are using it as a mask or cover under which they can obstruct and resist the enforcement of the laws of the United States. Our Secret Service, in the performance of its legitimate work, has run across the activities of this organization, and I know whereof I speak. Its chief counsel, in fact, are Hayes, Kaufman & Lindheim, of New York, who have long been the most active professional advisers of the German Government and the intimate associates of Carl Heynen, who has just been arrested in New York. This League has succeeded in inducing a lot of well-meaning citizens to lend the use of their names to its nefarious purposes. Most of them are, I believe, ignorant of the real objects of the organization. I think that a careful investigation would disclose a situation with which the Government ought to deal, and I believe that such an investigation should be made.
It is the same Kaufman, by the way, who has been making a desperate effort to secure a place for himself on one of the Exemption Boards.
Of course, I have no fault to find with the correctness of the legal position you have taken, but I do think it is unfortunate that the War Department has recognized, even to this extent, an organization which is, I am convinced, a cloak for German intrigue and design in this country, and which will gain thereby a prestige and standing it could never have acquired otherwise.
This merely emphasizes the fact that a more effective intelligence organization ought to be created and all departments brought into closer connections with it. I hope that we can co-operate to this end.
William G. McAdoo 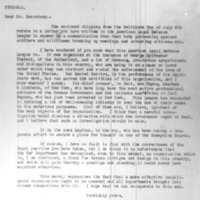