Eleanor Wilson McAdoo writes Jessie Wilson Sayre in Italy with news from Princeton, and says that she is sorry that Jessie is sick.

I am soso sorry that you have been sick. I do so hope that you are perfectly well again.Princeton is going along in the same dull old way with nothing exciting happening except occasional baseball games. I have been to only one game as there have been only two since I have been able to go and one was on Wednesday when I went to dancing-school. We played Pennsylvania, in Philadelphia last Saturday, that is yesterday, and were beaten, by the score of 8–3. Wasnt that perfectly horrid? And the mean part about it was that we the score was 3–1 in favor of Princeton at the end of the sixth inning and they got five runs in one inning. Just think! Purnell, the best batter in the crowd, couldnt play because of a sprained anlkle and so Stevens had to take his place at third base However we play them again here soon and I do hope that we will beat that one. Beth and I bet three “eight for a cents” on the game, I that we would beat and she that we wouldnt. And of course I will have to pay it, worse luck!I gave all your letters to Miss Fine to read and she said that they were just lovely and that she enjoyed them so much.
They are just too sweet and interesting for anything. I certainly won't lose any of them A Mr Erdman preached in Chapel to-day, the son of the other Dr Erdman that came here before.Papa doesn't like him and so he stayed at the inn and this morning preached a very bad sermon they said. I went to the second church and heard a little Seminole because Dr DeVries is away.
It was quite a good sermon I thought. But we had the most awful solo that has ever been sung, I suppose by the same man that does it every time. But it was dreadful. Every time he would try to go up his voice would break and go off in the most awful discords imaginable.
Just think, darling, its only a month before you land. I'm just so happy when I think of seeing you and sweetest mamma again, that I don't know what to do.
I do so hope that you are all perfectly well and having a fine time.
We are all perfectly well and we heard from Margaret several days ago saying that she had gotten there and was alright.
The girls say that they will write to you just as soon as I give them your address which I will do to-morrow. They are getting up a play now and which I think is extremely silly. They begged me to beg papa to let me act. I didnt beg him to but only asked because I don't want to act at all. IfDuffie knew that I had discouraged him from letting me she would be simply furious, so I do hope she won't. Bethdon't want to act either and I guess she'll ask her mother and father not to let her, too.
They want to have men in the play and as none of us are willing to wear trousers they they are going to have monks and nuns and have the most silly lovering thing you ever saw. I don't want them to know that I dont want think that they play is silly because I am afraid that they'll think that, because we wrote last one, we think that no one else can write as good a one—which I certainly don't think.
Isn't it lovely Miss Matheson is coming here again the last of this month to act “Mid Summers night's dream” and another of Shakespeare's plays. I forget which one, out in the yard.
Isn't it lovely, so I can see her after all.
I fully intended writing to you, deary, during this week, but I really have not had a speck of time, because of my lessons which keep me busy most of the time. I am afraid that I must fr stop not because I must write to Margie.
So goodbye my own, own, little precious sister. Give my love to my own darling sweetest mamma and to all the rest. 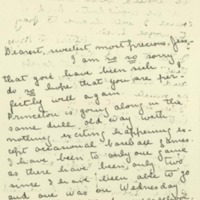