Add to the 2nd half of Section 27.
The Secretary of the Treasury is further hereby authorized and directed to refund the balance of such of the two per centum United States bonds having the circulation privilege, the refunding of which is not hereinbefore provided for. He shall accomplish such refunding by the issue of bonds. Such bonds shall be a direct obligation of the United States, shall bear interest at the rate of three per centum per annum, shall be payable in gold coin of the present standard of weight and fineness, shall mature twenty years from the date of issue thereof, shall not have the circyulation privilege, and shall be issued under regulations to be prescribed by the Secretary of the Treasury as to the form, tenor and nature thereof. Both the refunding notes and the three per centum bonds hereinabove authorized shall be exempt from Federal, State and municipal and other taxation both as to income and principal. The Secretary of the Treasury shall upon the first day of July, nineteen fourteen hundred and fifteen, and annually thereafter, under regulations to be prescribed by him, allot among the several National banks, in proportion to the respective amounts of their circulating notes outstanding upon such dates, an aggregate amount of two per centum bonds United States bonds with the circulating privilege, which such banks shall be entitled to exchange for the three per centum United States bonds hereinbefore authorized, provided, that in no one year shall he allot a greater aggregate amount than twenty million dollars thereof, and upon the receipt of such two per centum bonds from such National banks, the Secretary of the Treasury shall effect the exchange. Should any National bank fail in any year so to exchange its full allotment of two per centum bonds for the three per centum bonds as herein provided, the Secretary of the Treasury may permit any other National bank or banks to exchange bonds in an amount equal to the deficiency caused by the failure of any one or more banks to make exchange in such year. At the expiration of twenty years from the passage of this Act every holder of United States two per centum bonds then outstanding shall receive payment therefor at par and accrued interest, and thereafter such bonds shall carry no interest. Nothing contained in this Act shall be construed to alter, impair or restrict the circulation privileges now given by law to any bonds of the United States. 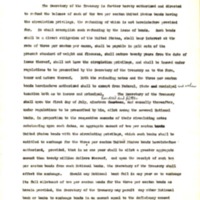