Precious little Sister, I feel today since getting your letter yesterday, as if you were my child and I yearning to protect you and your child from all troubling things,- I dont know why unless it is because you are pulling up stakes again and little Faithie is coming out into a bigger world than she has lived in so far.

Bully for you that you are willing to pull up stakes- It takes courage to do so, especially I should think to leave California where living is so beautifully easy. ********** Just this minute a naked coolie with large dark eyes that look gratefully into mine every time he sees me- I think he is saying you dont call me a coolie you like me as a human being- arrived with an air mail letter from Faithie and before I read it while I am still chuckling I want to describe - no I think Ill send you the envelope and let you chuckle with me and wonder too how the letter ever got here-- It seems to me her writing beats mine even but I dont know- I wrote an English girl a note the other day and she could not read one word of it although she has been a professional secretary- she is one of the disciples, sadhakas as the femine disciples are called. Dont dare tell Faithie that I laughed over her writing, but do tell her to type all foreign letters.----- Well of course I stopped to read the precious letter- even to write to you I could not wait for it. I read all but the last half of the last page and that will have to wait for deciphering with a magnifying glass, for it was in handwriting while the first part was typed. The letter is a marvellously perfect reflection of Faithie- she can give perfect reflections of herself because of her perfect sincerity- at this age. For instance she quoted two poems saying that both were favourites- The first is sweet and sentimental, not much more, the other is Rupert Brooke at his best, and you know what a true poet he was at his best. Well Faith the young girl, still adolescent loves and has need of sentimentality, but Faith the soul that has lived God knows in how many bodies, recognises the kindred soul of the poet. Then she wrote some lines of her own and in them the sentimentality is transfigured by a touch of something from the poet soul. Oh Nell, Nell if it is possible to do so save her from just banality, from marrying a nice boy with blue eyes who with the flatness of an ordinary mind and ordinadry ambitions, will smother the exquisite soul with a vulgar life- I mean vulgar in the original sense of the word, a way of living that is for the crowd, who feed on and are satisfied with just ordinary things. I know you are aware of this danger and that that is the reason you are planning to take her away from California-- That was just a cry from my heart responding to the beautiful soul and thinking of its needs. As I see Faith she will always need sunlight, the light of sympathy and intuitive understanding to grow in- she is too sensitised a being to be benefitted by hard and harsh and cold treatment. My but I am glad that she is going to make friends with Francis, for of course the only way to combat the allure of just blue eyes and broad shoulders and a happy nature, is to give her a taste of something so much finer that everything else will almost bore her compared with it. You have already given her a protecting garment of taste for the immortal nectar of poetry that will make ordinary brews of small talk pall on her sooner or later--, if only she can escape the chraarm of a beautiful body,-our American boys are beautiful!

Now about Princeton and Charlottesville-- I dont know a single thing about the latter but Mrs Alderman, the widow of Dr Alderman, you remember him is one of my good friends in New York. She is sensible and good and will be happy to answer any questions that you might want to ask her. I am sending her a card in this same mail to ask her to give you the benefit of her advice when you write, but I shall only say that you might write, so as not to to bind you?. I cannot help but think of you as well as Faith and I would love it if you were near enough to New York to get to stimulation that it can give you in the way of the theatre and music and art exhibitions. Probably Charlottesville lives on the movies as much as any other American town and would it not be good for Faith too to feed a bit on something else in the theatre than movies? I think that she is at an age when she could fairly take in at every pore the impressions that beautiful pictures, music and fine plays can produce on a sensitive mind. I imagine that outside of the university life the life in Charlottesville is as banal as that in most southern and western towns, especially now-a-days when all the young people spend so much time drinking and going to the movies- but that is just a guess- There may be a real cultural life there as far as I know. Mrs Alderman, however, seems to be glad to leave it for good and all-- She has sold her house there, but she is not the cultureed type herself- I mean she is a gentlewoman to her finger tips, but rather the kind of woman that the older south produced, not the earliest South of Virginia, but the gentle south of lets say New Orleans with its mardi-gras and gracious living, but little profound reading or thinking. She is from New Orleans. My guess is that our dear South is still in the stage as far as culture is concerned of the earnest effort to improve oneself typified by the club woman, perhaps most of America is still in that stage. As far as the week-ending is concerned and the drinking- could you not depend on Faiths desire to please you and just ask her not go in for that sort of thing? I would not by any means take her to New York to live, but I do think it would be a good thing for her to be near New York. Why the visits I used to make with Mother to New York are still living memouries with me and I know that the visits with her to art exhibitions shaped my taste and opened my eyes.

You say that Faith is coming to the Orient with Mac-- Will that mean India too? I suppose it will be a characteristically rush trip since Mac will be running it-- but do get her to read up a little on the history of the Orient so that she will have some appreciation of what she sees, and do find as sympathetic histories as possible. They are all more or less inadequate but still if she has just an outline of the history of the east in her mind it will help her orient herself. I am heartily ashamed of my abysmal ignorance of Indian history which I am gradually trying to reduce. If she does come to India would she come here? I would so love to have her see the Mother and the Mother see her- It might be an experience she would never forget- it might not, for that will depend on whether or not she is capable and at so unripe an age of realisng to any degree what the Mother is. I know that I could have met a Christ at that age and probably only realised 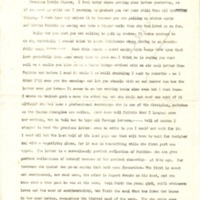