It was lovely to get a dear, dear, letter from you. You never can know how much it means to me to hear from you. It's like a little breeze of love and home straight across the continent. My precious, darlingest, sister, every word from you is worth its weight in gold.
Your letter sounded more cheerful in spite of Macs departure and the other troubles I hope it reflects more than just a passing mood.
Now to answer some of your questions - oh drat - your letter is in Frank's pocket where I stuck it on the subway Tuesday and he's not here so I'll simply have to remember them as best I can.
First Edith has certainly not changed, nor in my opinion is she capable of change as far as Father is concerned. If she thought we wavered in loyalty she might change to us, of course. She violently disapproved of the choice of Root and Margaret tells me wouldn't approved him. She has no influence in the choice it seems. The two factions are at swords points and the faction that wanted it went and voted and the others weren't there. However that was protested, another meeting was called which was more representative; still "our" faction, so to speak, was out voted. Edith wasnt asked to consent. It was just done. I don't know why she went to the dinner. Perhaps she has so little to do with their decisions that she didnt feel she was endorsing them by being there, but thats only a guess, of course.
I agree with you and Margaret about it, really, and yet there is so little (or rather no) magnamimity, generosity, vision or anything else on the Republican side that I can't help appreciating the bigness of our gesture which says, "picayune as your contributions to peace are we'll make the most of them, come on and do better, well cerate with anything that has the slightest promise in it, forgetting everything but the one grain of unselfish activity on your part." Of course thats what they wanted to do. I am trying to look on the bright side thats all. It all may be a stupid unpolitic failure, but at least that's what they were trying to do, by being magnanimous themselves to see if they couldn't lift it out of the morass of party hatred as such in which the majority of Republicans still keep the whole question of peace.
Now as to our interview with Edith. She's a funny person, you know. No hints take. We tried the broadest kind on Sunday - no success, smiles cordiality etc. but nothing gained. So on Monday we asked her right out for all we wanted. She responded at once and was as affable about it as possible. I couldn't describe her as difficult at all, nor do I think there was any shadow left behind. We have had cordial letters since from both her and Randolph and I'm sure we would have seen it in his letter if had been any feeling on her part.
Frank wrote all this to Mac as well as an answer to his question as to whether he had shown the entire correspondence to Edith. No, indeed, only pertinent parts. This letter he didn't mail because your letter says he has left, or would be gone before Frank's letter arrived. We are hoping to see him in New York. How I wish you were all to be in New York again, so that we could see the precious children and you, too, and have a reunion again. Dearest dearest Nell, how I adore and love you all and long beyond words to see you often often. I hate this wide continent that separates us. Dearest love to Mac and the dear little girls and you. 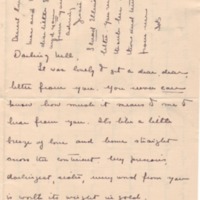