"If this counsel or this work be of men, it will come to naught; but if it be of God, ye cannot overthrow it; lest haply ye be found even to fight against God."

The noblest statesman known to history has gone to his rest. His life will be an eternal memory of honor to his country that he loved so well and served so truly, and his work will be an eternal benefit to humanity.
Woodrow Wilson was a friend of all the world; and those who knew him best loved him most. 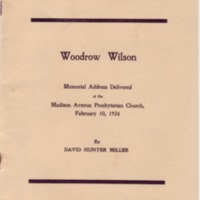