A prospectus for endowment of the Ellen Wilson Memorial Fund.

WHY do you love a little child?
Because it is helpless. The more helpless and needy it is, the more firmly it grips the heart. If it is a child of poverty, we pity it; but we have hope, for America offers its educational advantages to the poor as well as to the rich.

The richest vital asset in America is these three million Anglo-Saxon mountaineers. They went into the mountains before and just subsequent to the Revolutionary War.

Thomas Nelson Page says of them: "In their virtues and in their vices, in their knowledge and in their point of view, they are substantially that in which their ancestors were 135 years ago." Another, who knows them well, says: "I expect to see the day come when the mountain regions of the South will be as peculiar a joy and glory to America as old Scotland is to Great Britain."

Their mountains have shut them in, and the tides of development and education have swept past them and around them.

WHILE the statesman of the White House was busy with the cares of his great office his devoted companion was led to think of this splendid and neglected element in the life of the nation.

With a womans unerring intuition her heart was enlisted in the uplift of the children of these stranded millions. When she saw her vision she was not disobedient to it, but threw herself with sacrificial earnestness into its call.

It is a far cry from the White House and DuPont Circle and the wide Potomac to the black mountains and the lonely valleys and the limpid streams that rush under dark pines and rhododendrons.

The Lady of the White House could forget state occasions and social duties while her heart made long pilgrimages to sympathize with the poor children of the dark valleys and the gloomy outlook.

She loved them and her heart yearned for their welfare.

She surrendered her heart to her Master in a passion to serve them.

It was given to her to see the vision of their need, and to taste somewhat of the joy of ministering to it.

Many boys and girls were having their opportunity for education, and many weary teachers were heartened in their lonely life by Mrs. Wilsons generous interest in them.

With her heart inspired by this noble task, she fell asleep, leaving its completion to others who love needy little children.

IT is now proposed that the women of America undertake the fulfillment of Mrs. Wilsons dream as a memorial to her. To that end a movement has been launched to establish an endowment to be known as "The Ellen Wilson Fund for the Christian Education of Mountain Youth."

The proposal has received the unqualified approval of President Wilson and his family, and "The Ellen Wilson Memorial" has been incorporated under the laws of Georgia with headquarters in Atlanta.

To insure the safe and proper investment of the fund, the charter provides that it shall be held in trust by The Executive Committee of Home Missions of the Presbyterian Church in the United States, Incorporated, the income from which shall be turned over to a non-denominational board of women to administer.

In accordance with President Wilsons wish, the benefits of the fund will be available for students without reference to denomination or school attended, provided it is a Christian school.

The men and women of the nation who honor the memory of Ellen Wilson, and are interested in the educational and moral uplift of the people of the mountains, are now invited to assist in the creation of "The Ellen Wilson Fund" as a permanent tribute to her beautiful life.

My dear Mrs. Hughes:
My daughter Margaret has handed me your kind letter of August 15th. We have had a little family conference, and I want to say for my daughters as well as for myself how deeply we appreciate the action of the little conference you held at Montreat, and how glad I am to make the suggestions you ask for. My own judgment would be that it would be best to raise a fund which would be an endowment, the interest of which should be used to pay the way through school of mountain boys and girls--because I know that this is what Mrs. Wilson would have done if she had had the means and opportunity. She was paying for the education of several herself, from year to year.
It might be called the Ellen Wilson Fund for the Christian Education of Mountain Youth.
I cannot say how much I am touched by this action of the ladies concerned. It gives me a certain kind of joy.
Cordially and sincerely yours, 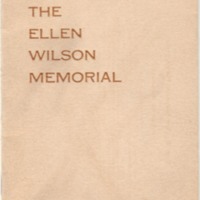