Eleanor Wilson McAdoo writes her sister with family and political news from the trip to Cornish, NH.

came out about me!
To-morrow we start of on a little trip into the White Mountains - don't we wish, tho, that you could be with us, dear. We couldn't put if off because the Smiths are coming next week and then there would be too many people for the automobile. But we hate to not wait for you. We're going to be gone until Sunday night and are going to stay at the Flume House and two or three other places on the way. I think we're going to have an awfully good time.
Jetty and I are very, very busy every day - just doing all sorts of exercise, etc. We've played a good deal of tennis and we're putting heaps of determination into trying to be good "golfers" and we ride horse back about every other day - and then I try to paint and we embroider madly in spare moments. Sounds pretty strenuous, doesn't it? The horses have been here about two weeks and we've been having just bushels of fun with them. I see where you and I fight about Lady Warren, because she's a beauty and so much nicer than the other two - they're just ordinary. Now, I ride her quite undisputedly because the Sergeant says that only a good rider must ride her and Jetty says that that doesn't mean her! But it does mean you, so we'll take turns. This is the most heavenly riding country you ever saw - lovely little wood roads by the dozen.
Did I tell you that Ruthie is over in Hanover spending the summer - only 15 miles off? I went over there for a little visit and went to a dance that was heaps of fun. My, it was good to dance again - I was simply wild for it. There's going to be a little informal one in the Vonnoles studio, to-night, which may be fun or may not - I've lost my heart completely and entirely (except for the whole of it that Bs got) to Maxfield Parrish. He's beautiful and a perfect dear and has the most heavenly children.
This letter was going to be a very thick book, with all the news - big and little - in it, so that you'd take to cussing before you managed to wade through it. But, I've just discovered that we have to go out to a sort-of-a-kind-of-a party this afternoon and Ive got only twenty minutes to dress. So, you're saved from too much of a good (?) thing.
But I musn't forget to tell you that Father said in his last letter to Mother that the newspapers don't know what they're talking about, as usual and that the Mexican situation the tariff bill and the currency are getting along well and we needn't worry about them and that the heat in Washington isn't so bad and he's very well and standing it splendidly. All this is in case you've read the papers and have gotten a wrong idea about things. But we don't know when he can be here again, alas!
And now I must stop -
Dear, dear love from every member of the family for our precious and beloved little Margie, of whom we're all so proud. We're so excited about the concert you're going to sing in there - goodluck, darling
I love you - oh so much - blessed sister that I miss so dreadfully 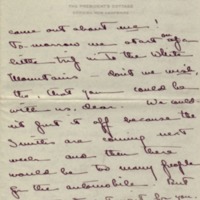