My own darling Mother,

I am so distressed about your never having gotten my telegram. You all must have been so worried and must have thought that I was so careless, but I sent it the night I got here just a few hours after I arrived and I don't know what could have happened to it. I never heard of a telegram being lost, did you? Aunt Annie told me yesterday that she had gotten fathers telegram and I was so mad about it because I have been thinking all this time that you all knew I was here and that it was alright. I am so sorry. I had a very nice journey except when I thought about leaving home and those dreadful five months ahead of me. At Baltimore, when I got on the train I heard some one say, "Why, hello Nell!" and there was Miss Fenner, the art teacher, who is just as nice and jolly as she can be. I was so glad to see her because I do so hate to change at Washington by myself. At Washington another of the nicest of the teachers got on and at Alexandria two more and then at Richmond another one! So I came down escorted by five teachers. I certainly wasn't lonely and they were so nice to me. About forty miles outside of Richmond we waited for almost two hours for a drawbridge to be shut so we were pretty late, but Mr. Jay didn't count that as being late to school after all I'm glad, - or rather I'm sorry to say! It would have been so nice to have turned around and gone right home again. You know, that train didn't go straight through to Baltimore after all, as I suppose you all know because Will was going to write to Cousin Florence and let her know so she wouldn't take it. I changed at West Philadelphia and waited over half an hour. I sat in the same seat, all the way to Baltimore, (because all the Pullman seats were taken) with a very nice old maid whom I discovered almost immediately had been to Muskoka the same summer that we were last there and had stayed at Ludd Haven. We got quite friendly, so you see I had company all the way down! Margaret Hoyt was still there and she was just perfectly dear to me so I had a very nice time in Baltimore in spite of Jessie's not being there. Isn't Cousin Margaret nice? I am crazy about her. Will got up early and took me down to the train and was really quite nice. So the whole journey was much nicer than I expected it to be, I only wish that you had gotten my telegram.
I have been very happy since I got here because Helen has talked it over with her sister at home and has changed her mind after all!!!!! We pledged her last Friday and we have both been so happy ever since that we havnt known what we were doing. Helen looks like a different person and oh she is so dear and I am so happy about it. I hope you will know her some time. I know you would like her. She is sitting by me now writing too and we have been giggling all afternoon like crazy people.
Annie has had a bad attack of tonsilitis but she is well now, although I don't think that she will be allowed to come back to school for a long time yet. Aunt Annie seems well, though a little tired. I am going down on Wednesday to see about my riding habit! I really am, and Aunt Annie is going down with me too. Isn't that fine!
I try not to think about the five months and no holiday but now and then I get so homesick. I do hope that you are all still well and that father's arm is really getting better. Is it decided yet exactly when he is going to Bermuda. I wish you could go with him sweetest, dearest Mother. Has Jessie gone yet? I suppose she will have gone before this gets there. It is late now. Oh I wish I was still at home and could see you all. Good bye darling Mother.
With a whole heartful of love for you and dearest father and Margie and Jessie if she is there.

P.S. I forgot to aks you about my oil things. Miss F says that we can get a nice box with everything in it - paints and brushes and all - from a nice firm in Baltimore that she knows about. The whole thing will cost $6.50 and she says that she thinks that that is as cheap as you can get it. So shall I just order it from there? Then I wanted to tell you too, that I left my mandolin music book behind. Would you mind looking around my room and seeing if you can find it because I'm pretty sure that I left it at the lake. Thank you so much if you will. I am very well and will be about the eggs and the fish immediately.
This is a rather long P.S.
Love again from, 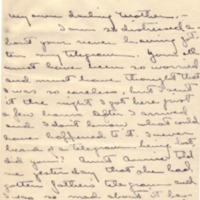