I have to-day telegraphed the State Department how strong and widely spread the feeling is here that the policy of “watching and waiting” in Mexico has gone on long enough. The excitement about Benton is general and intense. I hear it and read it on every side. What I telegraphed about the German Ambassador’s remarks—well, I take his impudence only as symptomatic of the German spirit of militarism. He’s screwed up courage enough to express himself to me, encouraged by the criticism he now hears here of our course towards Mexico. This German princeling Artemas Ward would have called an ‘amoosin’ cus,’ a haughty social swell an (I hope I don’t do him injustice) a pretty fair speeciman of the German courtier—a little-big man. Of course his remedy for everything is the sword, and I’m sure he’d like to see England and the United States have a row.
Not so Sir Edward Grey. In my long talk with him yesterday, he showed appreciation of our difficulties and sympathy. You will notice his clearness and restraint in his answer in the House of Commons, which I enclose. But he is much worried. He told me that the British public never became so much excited as when a subject had been killed in a foreign land. He confessed to some fear of harsh criticism of the United States in the House of Commons. But he is our mainstay—a moderate, patient, wise man, the biggest Englishman I have met. I am to dine with him tomorrow night; and, if I hear anything worth writing, you shall hear it. These friendly, intimate meetings sometimes yield more than even the best official interviews.
I don’t foresee just what we may be able with dignity to do in this case of Benton. But the more we can do, the more patient English opinion will be. It is just the kind of an incident that excites the Briton most.Sir Edward’s pleasure at the renewal of the arbitration treaty was very great. “Things are clearing up,” he said. On that, my own hearty congratulations.
The public comment on it here has been far less than it would have been if the Benton incident had not come at the same time. That has for the moment taken attention from every other foreign event. 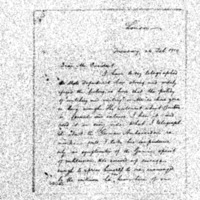