While awaiting the issue of events in Mexico, might not further efforts well be made to invoke pressure from abroad upon the Huerta Government?
Could not the leading European nations be led to take the position that their recognition of General Huerta was in his capacity of prIovisional president only and did not contemplate his retention of the presidential office---an ambition which, if persisted in, must cause a new and more serious scrutiny of the events of February.
I suggest that a strong statement of the objection of the United States to the permanent presidency of General Huerta (and other actors in the coup that overthrew lawful government in Mexico) be prepared and sent to our representatives at the capitals of the Powers which it is desired to influence;-- this to be, not a formal document, but a warmly-written plea, including a narrative of the origin of the government of General Huerta, a description of the nature of his rule, an account of the condition of the country, and a statement of the troubles which will inevitably attend retention of office by the present dictators. The plea to be accompanied by instructions to the Ambassadors and Ministers to familiarize themselves with its contents and its spirit, and then, on high moral grounds, to urge the Governments to which they are accredited to support the United States in it efforts to reestablish peace in Mexico.
If, Great Britain, France, Germany, and Belgium could be persuaded to announce that their recognition of Huerta would terminate October 26th unless on that date a non-participant in the February conspiracy were elected President-- that result would be pretty well assured. I cannot but believe that we could secure this European cooperation if we went seriously after it. It might even be worth while for Governor Lind to make a rapid visit to three or four capitals in order to impress our diplomatic representatives there with the earnestness of the American Government and to present the facts at first-hand.
An inspection of the list of governments which (according to his message to Congress) have recognized General Huerta as President of Mexico reveals the fact that recognition is withheld by 12 of the 21 other nations of the Western Hemisphere:
The United States
The Argentine Republic
Bolivia
Brazil
Chile
Cuba
The Dominican Republic
Nicaragua
Panama
Paraguay
Peru
Venezuela

The above countries constitute an easy preponderance in the hemisphere.
Could not a great deal be made of the circumstance that the most settled and most powerful Latin American nations, conscious of the evils of violent political methods, refuse to admit the legality of the Huerta Government?
The Chilean and the Cuban Ministers near the Mexican Government are most outspoken in the denounciation of the crime of February. It would probably be not at all difficult to organize a Latin-American sentiment in support of the position taken by the United States. 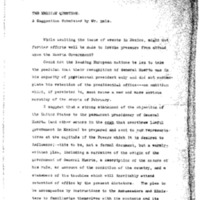