A memorandum on conditions in Mexico by Fransisco Escudero.

RELATIVE TO CONDITIONS IN MEXICO.

Mexico is a country of intermingled colonization, composed of people of quite different races, traditions and civilizations. As a people they may be regarded as a genuine national unity, yet such has only come into existence during recent years. Mexico was the principal colony founded by Spain in America, and so it was here that the conservative classes, the aristocracy, the clergy and the military, gained their highest development and stood in opposition to the humble conditions of life in which the great mass of the inhabitants lived. These facts have been the cause of the several convulsions that have afflicted the Mexican nation in its struggle for life, during the last hundred years.

The war of independence was rather a social than a political strife, its main object having been to emancipate, from a social point of view, the Indians, the mixed bloods and the peasants, whom the wealthier classes, too jealous of their own privileges, had denied the right to mingle in public affairs. This war for independence lasted for over eleven years, and it did not come to an end until the aristocracy gave it their own support in hopes of becoming more powerful under the new regime, than they had been under the crown of Spain.Once the political, but not the social, independence was accomplished, the struggle was renewed between the conservative and the liberal classes. This struggle covered a long period of time and was full of dramatic events, such as the French intervention, and the subsequent establishment of the so-called Empire, an enterprise which ended in the death of an Austrian prince, and which brought about the final establishment of a democratic government and the separation of the Church from the State. The clergy were granted full liberty in respect to their own welfare and ecclesiastical duties, but were thereafter not allowed to meddle in government affairs.The country, now almost exhausted by long internal strife, was willing to tolerate the dictatorship ofPorfirio Diaz who maintained a state of peace for thirty years, during which public wealth increased considerably; a middle class, never known before, was created, and public instruction began to be imparted, though in a scant manner. Diaz, however, utterly neglected to give the people a political education and to protect the latter classes from the oppression of the aristocracy and the ambitions of the Church, which had already been abundantly reimbursed for its former losses. He also failed to bring about a distribution without discrimination of the public wealth, and to satisfy the appeals for justice which were made throughout the country.

Diaz failed to understand that after the thirty years of his dictatorship, the social conditions of the country had undergone important changes; the cost of living had increased, while wages had not been raised proportionately. Thus the people lived under unbearable conditions, their earnings, in later years, being hardly sufficient to afford them existence.

Francisco I. Madero embodied the aspirations of the newer generation of the Mexican people, who, having no legal means of redressing their wrongs, were compelled to resort to arms.The revolution headed by Madero was, like the wars of Independence and of the Reform, a social, rather than political, struggle. Public opinion, constantly supporting the revolutionary movement, brought Madero quickly to the Presidency. Unfortunately, Madero's pure ideals and magnanimity brought about a compromise with the tottering administration ofDiaz, by means of which a provisional president was named, Mr. De la Barra. During De la Barra's administration all the revolutionary elements of the country, quite sure that they would be harassed no more, prepared to regain power and, in advance, to undermine both the administration of Madero and the principles of the revolutionary party.

In fact, Madero never ruled at all; he was constantly prevented from doing so by the reactionary party which, through the press, entirely under its control, and a majority in the hold-over Congress, proceeded to foment revolt and excite the public. His administration was finally overthrown by virtue of joint action on the part of all the reactionary elements, and by means of one of the most cowardly betrayals ever recorded in history.The government, having been forcibly seized by the military chief charged with the defense of its institutions and the protection of the persons representing the Executive Power, and having sealed that usurpation with the assassination of President Madero and vice-President Pino Suarez, the nation, in a solid mass, experienced a strong sentiment of exasperation, outrage and despair, because it understood the character of the betrayal, realizing, as a people aspiring to be considered as enlightened, what had befallen them; that their structure was once more in the hands of reactionaries, and that it was now a human impossibility to satisfy the aspirations that formed the ideals of the revolution of 1910. The interests that strengthened the arm of 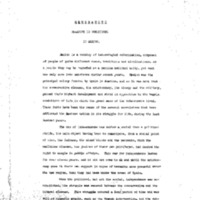