Accounting of enemy property after the war needs to include patents.

Dear Mr. President: Let me add this thought to what I said to you last Friday when Governor Fort and I left with you the draft of an Executive Order in the matter of enemy-owned patents:

In the final settlement after the war, we shall have to account in some way for all enemy property taken over by us, and that accounting will probably be made upon the basis of value as ascertained upon some agreed plan. We ought to insist that the value of such properties as we shall have sold was fixed by the sale thereof, because sold after public advertising to competing bidders. If the value of any of these properties is injured or destroyed by some act of ours before we make the sale, then the sale price will no longer be a fair test of value and we shall have difficulty in having that standard accepted. If we retain the power to issue licenses for the use of enemy-owned patents and sell the enemy-owned patents subject to that power, we will undoubtedly receive less for them at the sale than if sold without reservation. Unless we can show that our sales resulted in bringing a fair and adequate value for all enemy property, we may be forced to accede to a plan for fixing values which would go behind all our sales. This would result in great confusion, and might possibly cost us a great deal of money. I would like to be able to say, when our selling program is concluded, that we have received a full, fair and adequate price for every piece of enemy property sold, including the patents. In other words, we have sold all other enemy property without first decreasing its value by any act of the Government. Why not sell patents in the same way?

I have advertised for sale a number of properties in which the patent question is involved, and prospective purchasers are constantly inquiring as to what sort of title I am going to give them for the patents. It would expedite my work greatly if the Executive Order could be signed soon, which ever way you decide to make it.


To the President,
The White House. 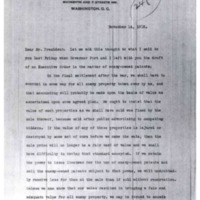