Your letter of the 25th of last month arrived several days ago. Was very glad to hear from you again,—many thanks.

To-day, no doubt, father is coming out to Liberty which will make it very nice for you all. Hope he has good weather while on his vacation. We’ve had quite a lot of rain lately, once in a while it’s fairly warm but generally very pleasant and agreeable.

You wrote that father told you I may be transferred to the regular service. Well, no doubt all physically fit men will sooner or later be transferred from non-combatant service to active line duty, and that, to me, seems to be quite natural as the government will want to place men who are not ‘physically fit (men) for overseas duty’ men into the Quartermaster Corps and other non-combatant organizations. Of course, you never can tell in advance just when this will happen. Furthermore I had written father also that I would possibly not wait for that time to come but was thinking about transferring, by my own request, to the line, and for two reasons: In the first place if the Government transfers you, one cannot tell to what organization or branch of the service one may be sent, whereas if a transfer is requested by the soldier it may be possible to choose an organization. For instance, I would not care to go back into the Infantry but would prefer service in Anti-Air Craft Machine Gun or Heavy Artillery or something of that sort. In the second place, I have seriously been considering whether as physically fit man has any moral right to be in the Q.M. Corps while others are doing the more active work. In regard to this I enclose herewith a clipping from a local paper and also a copy of a clipping from the N.Y. World, both of which will explain to you just what I mean. It seems to me to be a pretty hard thing for me to decide, even harder for me than for many others on account of (another) other sentiments which you, no doubt, can guess. At any rate, I have done nothing as yet and intend to await developments for a short while, especially for two reasons: Firstly, the Captain again promised a promotion which, I believe, it would would be wise to await as it might help along in case of a future transfer; and secondly on account of the furlough which I have already mentioned to you. I will know about the promotion within the next ten days at any rate but won’t be disappointed if I don’t get it as the Captain has promised it several times before and didn’t follow up his promises. In regard to the furlough, well, that’s also very indefinite. I reminded the Captain again a few days ago, asking him to approve my application (dated June 21st!), and he gave me a rather indefinite reply. So there is nothing left to do but wait a little while longer.

Otherwise everything is just about the same as ever. Have been seeing a couple of vaudeville shows in our Camp Theatre lately which were quite good. Nora Bayes, quite a well known singer, was expected to come up last week but her colored maid having been refused accommodation in the hotel in Spartanburg, she got ‘wild’ and took the next train back to New York without showing up at Camp. Generally take some walks on Sunday afternoons with some friends through the surrounding country. This is about the only exercise I get nowadays as my work keeps me busy in the office all the other days.

I believe I wrote you that we had a through physical examination last week and, although I wasn’t told, I surmise that I passed O.K. Whether this exam. is the overseas exam or not, referred to in the newspaper clipping, is hard to tell.

The German Prisoners I referred to are from the other side but have been confined in this country for some time already. They are all sailors, some from the Prinz Eitel Friedrich.

No, I haven’t become acquainted with any young girls as yet—haven’t made any efforts in this direction. Never was my line, you know.

The school you referred to is still going on. I took part in of it for two weeks some time ago but dropped out voluntarily. In fact out of about 110 men who started, only about 52 are still taking the lessons.I would have continued sending you the ‘Gas Gazettes’ or rather ‘Gas Attack’, but you know that paper was edited by the 27th Division which is has been over in France since May. Whether they are still publishing it ‘over there’, I do not know.It was very good of Paul to send me that letter and I think he has made wonderful progress in writing. Was very glad to receive the letter. No doubt my postals have arrived by this time?

Yes, I read about the various German concerns. Hits some of them pretty hard, I guess.

Glad to hear you all are well and I hope you are enjoying the country. Take it as easy as you can and get the most you can out of it.

By the way, Elisabeth wrote me twice that she had written you (to Brooklyn) but had received no reply. She said she had made a little sweater for Rhoda and wanted to know where to send it to. I gave her your address.

With lots of love to you, father, & the children, and hoping all are well. 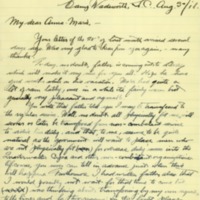