Just arrived in Spartanburg, that is at 2:15 p.m. and am now in the YMCA after having had a light lunch.

The trip was very uneventful, didn’t make any acquaintances, but this was due to the fact that I wasn’t in the mood to make any. No doubt father received the postal advising him of my safe arrival in Washington.

The train to Bound Brook was a local and didn’t arrive there until 12 o’clock. Elizabeth and Mr. Behrens expected to meet me at the station, but having taken this local instead of an express (which I was told would not stop at B.B, but which stoped there anyway) I missed them.

As usual, it was very nice in BB. Elizabeth told me that she didn’t come over that Saturday night on account of having been too tired after the dance the previous night. Now, in a way I suppose this was a reason, maybe the only one, but I can’t help having a feeling that that there was another reason.

As usual, cocktails were served in the sitting room before dinner and then something happened which at the time struck me as peculiar. Now, I don’t know exactly what to think of the occurrence, but anyway, as I said before, it was either a peculiar coincidence or, well, most probably owing to fact that we talked so much about the subject, I may have imagined things. Anyway, right after the cocktails were served, one by one the family left the room, excepting Elizabeth and myself—even the kitchen door was closed—generally it is kept open. About ten minutes later, dinner was ready. Now, the more I think about it, the more ridiculous it seems to me that the occurrence should have struck me so peculiar at the time. However, you can imagine how I felt at the time but, of course, I didn’t show it. Well, anyway, I decided to be extremely careful in the future.

I didn’t really want to write you again about this subject as I feel that after all our conversations, it must become rather tedious to you. However, you asked me to let you know exactly how things were in BB, and, then of course, I haven’t anyone else to discuss it with.—I may be a very foolish fellow, but I have thought about about all these things so much and still couldn’t change my ideas about the future. As you, of course, know, I think a tremendous lot of the girl and consequently am very much afraid that I did not succeed in controlling myself enough when I was with her. I should have remembered that she is 26 and apt to take things more serious than most younger girls would. So, if she did take things very seriously, and there is a great possibility that she did, I feel awfully sorry for her and feel like kicking myself. Well, lack of confidence in myself and the future has always been my worst enemy—and I suppose if I did have a little more confidence, things might have been different. I’ve tried ever so often, but it’s hopeless—however, I’ve bothered you enough with this and promise never to mention the whole affair to you again.

Mr. Bartels was not in BB. Elizabeth said she expected to visit you quite often and I hope she does so. Mr. Behrens seems to be quite a nice fellow and, of course, seems to feel very happy in BB.

My train left BB at 3 oclock. Before arriving at Washington I had some hot coffee which was brought through the train, and also two of the sandwiches which you gave me and some Xmas cake. Frankes also gave me a package of Xmas cakes. Had a walk in Washington, around the capitol and along Pennsylvania Avenue. Left Washington at 11:45 pm one hour late. There was quite a mixup in the sleepers, some passengers without sleeper tickets and some with wrong tickets, etc., and so it took until nearly 1 a.m. until things were straightened out, the berths made and I was in bed. However, the car was terribly hot and much sleep was impossible. Got up at 8:30, had breakfast in the dining car,—eggs, coffee & rolls, and after seeing the comical but tragic picture of a waiter spilling an entire breakfast over an army chaplain’s new uniform, spent the rest of the trip in the club smoking car.

Of course, it is needless for me to tell you how much I disliked leaving home again but,—well, it had to be. Any way, there’s a lot of comfort in the fact that the weather is splendid down here—regular spring sun shine! Hope it stays this way and everything will then be fine and dandy.

Guess I’ll go up to camp some time after supper and in the meantime will write a few more letters.

Please give my love to father and the children.

Hope all are well and that father’s cold has gotten a little better by this time.

With lots of love,

By the way, it seems that Franke's are very seriously thinking of moving to Long Island very soon. 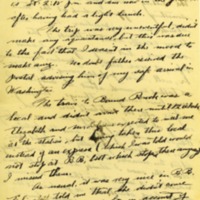