Mrs. George Bass of the Democratic National Committee advises President Wilson on how to pick women for the Paris Peace Commission.

Since I had the pleasure of speaking with you on Friday evening, a number of telegrams have come from all over the United States, either asking what influence may be brought to bear to secure appointments for women on the Peace Committee or naming some favorite daughter of the state or nation whose claims should be considered.

I would not, of course, make unasked any suggestions to you as to the personnel of women on that Commission. I would, however, venture to suggest again to you that no one, man or woman, should be appointed to any Commission or committee of any sort who is not devoted to you and your policies. In this connection I have a telegram from Mary Foy, a native daughter of California and a real leader of the women there for forty years, who always signs herself "Mary Foy, Democrat." She worships you, and her greatest desire is to be able to tell you so some day. It seems that you have been asked by women of California (and perhaps men) to appoint Mrs. Josiah Evans Cowles on this Peace Committee. She is President of the General Federation of Women's Clubs, because her group of California women praised her extravagantly and worked for the position, although her merit has since been shown to be very slight. Mary Foy called attention to the fact that she is an ardent, partisan Republican and that she was an anti-suffragist until women got the vote. Of my own knowledge I wish to say, Mr. President, that she is one of the most stupid women I ever met. She hasn't an ideal nor a constructive thought and never speaks a sentence of any value whatever. She was put on the Woman's Committee, Council of National Defense because of her official position as President of the General Federation, and was one of those practically retired in their recent reorganization. Dr. Shaw would tell you, should you ask her, that she is a stupid woman of no value. Besides this, I object to her because she is opposed to your Administration. At the late Biennial of Women's Clubs held at Hot Springs, Arkansas, last April, to which I was a delegate, she ignored in her program anything that tended to discuss the war work broadly. She simply claimed some credit for herself as being on the Council of Defense and had a Red Cross report or two, but left out all of the rest of the constructive work which was winning the war, and your name was never mentioned.

I did not speak to you about women on the Peace Commission because it has not seemed to me so important that one or more of them should be there. I have meant to urge upon your consideration the appointment of women on the various commission or boards to deal with the reconstruction problems, and I have hoped to be able to call to your attention later a permanent bureau dealing broadly and constructively with women and their increasing share in the responsibilities and privileges of the new world which is going to be built upon the foundations of the old. We have, however, should you appoint any women to the Peace Commission, many wonderful women of great value in this country. Dr. Shaw and Mrs. Catt, of course, stand for one phase of expression--the Suffrage. Then there are Jane Addams, who through reluctant to have us enter the war, followed you in and then through conscription and into every part of the necessary work, and who, though in ill health, spoke and worked all over the country for the Food Administration, and who stimulated women in the support of the Government everywhere; also Mrs. Glendower Evans, who followed the same course.

May I venture the hope that in the appointment of women you will listen not only to the recommendations of their personal friends or the call of states for their favorite daughters, but that you will, before making appointments, consult some of the women who really know the social work done in this country in the last two decades. I venture to suggest myself as one of those to consult because, in addition to a pretty wide knowledge gained a long civic experience, I have also the merit of single-minded devotion to you and your aims. 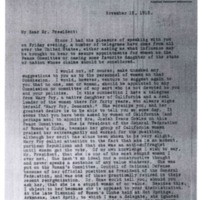