A trustee of the World Peace Foundation reports to President Wilson on the views of Democrats in New England.

That fact that Senator Lodge is prospectively Chairman of the Foreign Relations Committee I think justifies me in making sure that you have what appears to be a verbatim copy of the speech that he made before a representative audience at the City Club on Tuesday night.

As you know, the Boston Transcript is read by "all our best people". I need not point out that Senator Lodge did not mention the League of Nations or any form of international organization substantially different from that which was mapped out at the Congress of Vienna a century ago. He would have found Count Mettinich [sic] a most congenial associate.

Permit me to add that, after taking some pains to sense the public feeling in this community, I am satisfied that on an issue properly presented, your policies for a peace with justice based upon some sort of international organization, would command the support of at least two-thirds of the voters of New England. Confused as were the issues in the minds of the voters on November 5th, Massachusetts did better through the election of Senator Walsh than almost any other place in the country. For your type of democracy, New England is a good field to cultivate. I hope you have not forgotten that if 30,000 Republicans, rightly divided, had two years ago voted the Democratic ticket, you would have carried all of New England.

I enclose also clippings from the Boston Post urging Governor McCall for the Peace Commission. The Post has, I suppose, the largest Democratic circulation of any paper in New England.

Please do not spend one minute of your valuable time in acknowledging this letter. But I should like to feel at liberty from time to time to report such indications as seem to be to be worth while, of the condition of public sentiment here on the great issues of the foundation of permanent peace.

Perhaps I may add that I am one of the Trustees of the World Peace Foundation, which has the income of about $1,000,000 for this purpose. I was counsel for Mr. Edwin Ginn and worked into legal shape his plans for getting the world so organised as to prevent what has now (since his death) happened. He, more than any - perhaps all- others, was responsible for Mr. Carnegie's contribution of $10,000,000. Both of these endowments ought now to be put to active use in creating a public sentiment which shall back you in your plans for a world order. 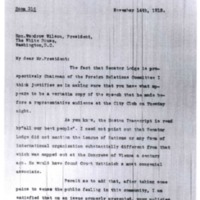