Former president of Harvard has some advice on what the League of Nations should do.

Your cordial note of November 8th reached me in Cambridge on the 12th - a rather striking example of the chronic inefficiency of the US Postal Service for more than two years past. I have not been able as yet to learn whether your appeal to the voters not to destroy the Democratic majorities in the Senate and House helped the total Democratic vote in the country at large, or not. Something - does anybody know what - made things go badly in South Dakota, Nebraska, Kansas, Missouri, and some other states in that region. In view of the rush of events neither you nor I take much interest now in that subject, except indeed as it bears on the question how to strengthen the Democratic party in general.

The pressing questions now are, how to help reorganize Russia, how to prevent Germany from going the Russian way, and how to organize a limited, safe, preliminary league to enforce peace from now on and abolish militarism and its economic burdens with all possible speed.

The practical problem in Russia looks like a military problem best to be solved by American troops, and American Relief Services. The problem in Germany has the same aspect. Its best solution would be (1) American garrisons avowedly temporary, as in Cuba, and intended only to preserve order and give time for the peaceful construction of a stable German State, and (2) the temporary cooperation of American administrators with government bureaus in Berlin to reestablish throughout Germany adequate supplies of foods, fuels, and the raw materials of her essential peace industries. For these American administrators the chief difficulty would be to find promptly and direct skillfully an adequate amount of shipping.

To contrive and perform these temporary services to Russia and Germany are comparatively easy tasks. To construct a League to enforce Peace, available at once, solid, harmonious, expansible, and likely to last is a task of alluring difficulty. The nations fit to constitute such a League must have had experience in strenuous cooperation in the War, have come to an agreement as to the attainable fruits of the War, and be willing to give up each some of its own freedom of distinct national action in order to secure the peaceful development of the nations now associated for War purposes and of the other nations which might hereafter be admitted to the League on application. The League should be constituted by a formal treaty which would bind all its members, no matter what changes might take place in political parties, legislatures, or administrations within the several nations concerned. This treaty should be published in full, and be accepted by the constituted legislative and administrative authorities of each member nation. One indispensable article of the treaty would declare that all existing secret understandings or agreements between two or more of the member nations would cease to be valid at the signing of the treaty which establishes the League. In other words, the new international agreement would supersede all preexisting unpublished understandings about boundaries, enlargements of territory, and commercial relations.

The League having pressing immediate duties and also far-reaching objects, and being also avowedly only a step toward the ultimate goal, anyone who undertakes to advocate this limited League is bound to give enough details of its organization, purposes, and hopes to enable those who aim at a much more comprehensive League to judge in what degree the temporary league might avail to build up gradually the ultimate league of nations or federation of the world. I present, therefore, the following sketch of the constitution and functions of a league limited to six nations, namely, Belgium, Great Britain, United States, France, Italy, and Japan.

It would be the first duty of the League to establish an International Council, the members of which should be appointed by the several national authorities, Belgium appointing one member, Great Britain five, the United States four, France three, Italy one, and Japan two. This distribution is based roughly in the population of the several countries including the population of outlying regions influenced or possessed by the several governments. This distribution of delegates would give Great Britain and the United States together a majority of the Council, a good disposition because these two are the oldest, richest, and most experienced democracies.

The first duty of the Council would be to appoint an Executive Commission, not made up of actual members of the civil governments of the several nations, but selected from well-known publicists, business administrators, economists, health officers, and navy and military officers of any nationality.

The next duty of the Council would be to plan and appoint a permanent international tribunal consisting exclusively of judges or jurists taken from within or without the League membership.

The Council should plan and organize international forces, military, naval, and economic, adequate to enforce its decrees and the decisions of the International Tribunal against all comers, and the Executive Commission would direct these forces through a supreme commander of its choice. Each member of the League would train and maintain its quota of the international forces, and keep that quota always ready to respond to the call of the Council for active service.

It being the main function of the League to prevent war, it would be the duty of the Council to discover and deal with in season causes of war which are developing in any part of the world, and to obtain and publish information about war preparations that are being made in any part of the world. It would also be its duty to bring about at the earliest possible day a reduction of armaments in all the civilized nations, and, therefore, to bring about the adoption of the Swiss Military Constitution by all the nations which have taken part in the great war now ended. The war teaches with emphasis two lessons: first, that in the present or any probable state of the world it is unsafe for the democracies to be unprepared for war, and secondly, that it is unsafe for civilization to permit any nation to maintain a military class or to foster a militaristic spirit in the people at large or in the educated classes. The Swiss Military Constitution provides a well-trained army, mostly kept in reserve but recruited by annual levies of young men who are entering their twentieth year, and yet breeds no military class and no militaristic spirit among the people.

Voting within the Council should be individual voting and not by nations. The decisions of the Council and Executive Commission should be made by majority vote, except that a two-thirds vote of the Council might well be required to admit new members and to determine the number of delegates which each new member should have.

It will be an important function of the Council to build up gradually a code of International Law, accepted by international public opinion and backed by the international forces. The Council should have authority to organize commissions for purposes of conciliation and arbitration, either permanent or special, that is, serving in a series of cases or acting only on one case. Every action resolved upon by either the Council or the Executive Commission should be forthwith published as widely as possible; but preliminary inquiries and discussions may be either private or open at the discretion of the Council and the Commission.

I dare say that you are already in possession of several projects for an immediately available League of Nations, and are familiar with all the ideas contained in the above sketch. In that case you will not need to waste any time on this letter. It is because I have not seen so definite a proposal as the above for a League of the Nations which have fought side by side in the war and have already created some instrumentalities for continued economic and industrial cooperation, that I write this too long screed.

European publicists and officials in general seem to me to take only a languid interest in proposals for a League of Nations; but there are signs that some of the democratic statesmen in Europe would take cordial part in a limited league of a few powerful democracies. I assume that the democracies which have fought this war to a satisfactory conclusion would agree that Germany could have no part in any League of Nations now to be formed, until the German people have demonstrated that they propose hereafter to have nothing to do with either selfish and destructive imperialism or selfish and destructive socialism. Will not practical statesmen also agree that the vision of a Federation of the World must come to realization gradually by a process like growth, and in the school of experience and practice.

I am with warmest congratulations and highest regard, 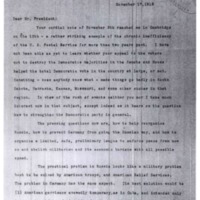