Italian ambassador wants to ride on the ship with President Wilson.

Mr. Phillips of the State Department has just called to tell me that the Italian Ambassador, having learned from J. Jusserand that he was going to Europe on the ship with you, called upon him (Mr. Phillips) to say that his Government had directed him to accompany the President to Europe if the French Ambassador accompanied him. He further inquired whether it would be possible for him and Madame di Cellere and their three children to be furnished accommodation on the ship. Mr. Phillips told him he was quite sure it would be impossible to make the three children members of the party, and then came to ask me whether I would convey the invitation to Count and Madame di Cellere, doubtless because he thought the War Department was arranging matters about the ship. I have just told him that I frankly could not see how we could avoiding asking the Ambassador and his wife on the same terms as the French Ambassador and his wife, but that I did not feel free to take any action in the matter without submitting it to your judgment.

I confess I am terrified to think where this may lead, as there are a large number of diplomatic representatives here and it will be wholly impossible for you to have a comfortable journey if the party is multiplied by many more additions. If you desire it, I will write to the Count and express regret that I did not know of his desire to go to Europe until after the remaining available [and suitable] accommodations had been placed at the disposal of the French Ambassador; although it may well be that because of the peculiar situation as between Italy and France the invitation ought to be extended to the Italian representative and stop there.

I have made arrangements on the ship which will so far ensure privacy for you and Mrs. Wilson that these additions to the party will not be intrusions upon your privacy. 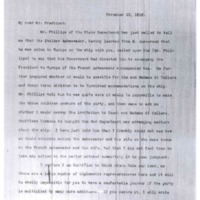