More on General Bliss's views on what should be done about Germany.

For example, every military man in Europe knows that there are two sides to many of the stories of wanton devastation for which compensation may be asked. But all of these things can be safely discussed provided Germany is first put in a position where she can not resume hostilities if she does not like the discussion. And with it all Germany will have the hope that her punishment will not be greater than common justice requires. Finally, it seems to me that the danger of a great successful war is close at hand. I mean the building up of an allied military party as strong as any that has ever cursed Germany. To avoid this, what better object can the Government of the United States set for itself than together with its associates to secure the disarmament of Germany and then after full discussion agree as far as possible upon what it is wise to demand for the present and for the future peace of the world.

I feel a very grave responsibility in making the foregoing suggestions and I do so only because of your instructions.

In connection with my cablegram Number One THB October 22d, it is suggested that the following method of communication be adopted to insure handling by proper parties. All cablegrams in my new series indicated in my Number 1 THB and all cables to me from War Department on similar subject to be enciphered from Military Intelligence Code Number 5, using the number groups in connection with series AA encipherment tables, issued semimonthly. Please wire me your decision. 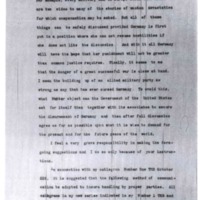