Requested report on what America has been doing to support the war effort.

In view of America’s many war activities which have necessarily been presented in disconnected form President Wilson was asked by Mr. Frank Dilmot, President of the Association of Foreign Correspondents in the United States, if he would give a resume of what the United States is doing to help win the war so that friends and neutrals alike might know the sum of this country’s efforts. In response to the request the President made the following statement:

“A knowledge of the energy and resources of America and above all the spirit of the volunteer permeating the nation is necessary in order to understand how the efforts of our Allies are being added to, and what is the extent of the total power rapidly accumulating against our enemies. The responsibility upon us discountenances over-confidence and removes us far from any spirit of boasting but it is well that we should look facts in the face at all times good as well as bad and a survey of the situation in America at the moment should be of service to all who have their eyes on the great conflict.

The question before us when we entered the war was this; could we spend the time necessary to lay the foundation for a vast output of men and materials sufficiently deep to ensure in the long run decisive consequences. The conclusion was reached that half measures would lead to half results, and thus it was we decided to take the time necessary to make our preparations so comprehensive and far reaching that our objects would be inevitably attained. The period of preparation is now approaching the summit and has already make possible production of magnitude. Tremendous as is the scale already it is growing rapidly from week to week. The entire might of America is well on the way to being organized for effective assertion in the war.

The rate at which the United States is shifting its man power from works of peace to war is shown by the fact that the American military force now abroad is roughly seven times as large as was our entire military establishment sixteen months ago. The Army - at home and abroad - now numbers over 3,000,000 men. Congress has been asked for authority to register for war service every male between the ages of eighteen and forty-five years inclusive, thus insuring an inexhaustible reservoir from which the various need of war activity may be supplied. We are manufacturing war materials on a scale ample to keep our troops supplied in high efficiency and we are also able to supply many of the munition and industrial needs of our comrade nations. As an illustration the ordnance department is doing business with approximately three thousand three hundred separate firms and its contracts number more than twelve thousand. It is the policy of the War Department that as far as possible the American over-seas forces shall be supported from here, so as to avoid imposing new burdens on the peoples in whose lands they operate. That is why American engineers have built great terminals and plants and more than five hundred and seventy five miles of heavy railroad with complete equipment. It is also why our port terminal facilities here are being enlarged by approximately 33,800,000 square feet of new storage capacity construction at a cost of two hundred and eighteen million dollars. Through these storage and port facilities will pour the stream of supplies which is to accompany our growing stream of men.

“Some idea of the output of material may be obtained from the fact that army purchases to date include over fifty thousand motor conveyances and two hundred and ninety-nine million articles of clothing. To speed the outflow of men, weapons, munitions, supplies and food we have taken into more direct control all our privately owned railroad telegraph and telephones and many of the great industries.

Our navy began operations immediately after war was declared and our forces in European waters now include more than two hundred and fifty vessels and nearly forty-five thousand officers and men. The total personnel of the navy has increased from eighty-two thousand to five hundred and forty thousand including marines and reserves. The marine corps has grown from less than fourteen thousand to more than sixty thousand. Thirteen hundred vessels of all classes have been added to the navy and there are more than five times as many ships in service as before the war. In addition to battleships and cruisers we are building some eight hundred smaller craft. We are construction more destroyers than any two navies possessed when the war began and we shall continue to produce them as long as the need exists. Germany persists in sinking neutral and belligerent ships without warning but the constant reduction in sinkings, and the utter failure to stop the flow of troops, food and munitions to Europe prove that ruthless submarine warfare has not achieved its purpose. The transportation of upward of a million and a half troops to Europe with the loss of fewer than three hundred lives is an achievement which has no parallel. The allied navies have worked together as one. In transporting troops conveying vessels patroling war areas and combatting the submarine there has been the closest cooperation. The British French and Italian navies have given us the benefit of their experience and equipment and we have gladly served with them and given them every assistance in our power. The growth of the American navy in ships and men means a constantly increasing addition to the strength of the Allies.

With regard to ships it would be stated that at the time of organization of the present shipping board in July 1917 there was not a shipyard where the board could place an order, and consequently it was necessary to build yards for ships. At the start the output of vessels was necessarily slow. With the completion or near completion of the yards the output has increased. The figures speak for themselves.

We have spent a long period in preparing the Aeroplane program and this preparation is now yielding the expected results. We are training thousands of airmen in this country and we have established and are building landing fields in France to make it possible to use a large number of aeroplanes. Without these new fields in addition to those fully used by our allies a great number of aeroplanes could not be operated. We are now turning out all types of machines by the thousand. We have designed and built the Liberty Motor which, demonstrated as completely successful for all its purposes, is now because of its standardized parts being turned out at a satisfactory rate/ We are constructing bombing planes at a speed which will soon make its influence felt in decisive form on the Western front.

In vital matter of financing the war operations we again see the splendid spirit of the volunteer. Our people have not failed to meet any request that the Government has made for financial assistance. All three Liberty Loans which have been floated since this country entered the war have been oversubscribed - four million persons subscribed to the first loan, which for two billion dollars, and there was an oversubscription of $1,035,226,550. In the second loan a total 9,400,000 persons oversubscribed $1,617,532,300, the amount of the loan being for three billion dollars, and of this oversubscription $808,766,150 was accepted. Four billion dollars was sought in the Third Loan, and seventeen million subscribers oversubscribed this amount by $176,517,550. This entire amount was accepted.

Almost seven billion dollars of the money raised by the Liberty Loan subscriptions has been loaned to the Allies at low rates of interest. In addition to oversubscribing all of the Liberty Loans, the people have willingly paid the heaviest taxes ever imposed upon them in the history of the nation. In order to meet the expenses for the coming year of the war, plans are being made in Congress for greatly increasing the present taxes and there is every indication they will be paid with the same cheerfulness that other war taxes have been paid in the past. Plans have been completed for the expenditure of vast sums for military and naval purposes during the coming year. Our gold supply of nearly two billion dollars is unsurpassed in the history of the country. We have learned to save and to conserve our power and we have kept our financing sound.

The story of the American Red Cross again instances the will and capacity of the American people for voluntary effort. Not only have our men and women enlisted by the thousands to carry on the work in France and many other foreign countries as directors, doctors and nurses, but millions of women are engaged in preparing hospital supplies and comforts which are used as freely for the enemy wounded as for our own. This organization, which number some 30,000,000 members, has been supported by the gifts of our people from every walk in life, who generously contributed to the two Red Cross War Funds a sum which exceeds $300,000,000 in less than a year. I need make no more than a passing reference to other humanitarian organizations such as the Y.M.C.A., the Knights of Columbus, Jewish Welfare League of America, and the Salvation Army. We have learned to spend wisely and give generously.

All our war activities would be ineffective should our food supply be inadequate for our Allies. We have vastly increased our supply by growing and saving. The department of Agriculture has secured greater efficiency on the largest farms as well as in the smallest gardens. I may show how vast this contribution on the production side is by a single detail; six years ago the land set aside for the forestry preserves supported 1,200,000 cattle; today on these same lands are more than 11,000,000 cattle Our farmers have increased to an extraordinary degree the supply of pork that we may have the most abundant stock of fats of every kind not only for our own use but for the use of our allied armies, as well as for the civilian population of all the countries with which we are associated in this war.

Our food conservation board has organized all our people to save. The housewife of the humblest home is doing her part. The number of “War Gardens” has increased to more than 6,000,000 this year. As an instance of willing cooperation, the great state of Texas shipped away all its wheat and put an embargo on the import of any of this grain. We have not had to make a systematic attempt to ration the country; the bread cards and other means of conservation of food are unknown to us. Yet more than 12,000,000 families in the United States have willingly signed pledges to observe the rules of the Food Administration and this fact alone explains the great savings we have made.

We have now begun to gather one of the greatest harvests, if not the very greatest, in our history. From this we can set aside a reserve for possible future contingencies in the United States and still have plenty to provide for the needs of our Allies to maintain their armies in strong physical condition.

Despite the great efforts and self sacrifices which the American people are making there are no signs of suffering or deprivations in our country. The loss of life has been heavy but the people have paid the tax of blood and treasure with fine spirit, worthy we hope of that spirit shown by our brother fighters. Is the whole 140 years of our national history we have never been so united as a people and never so unanimously devoted to a great cause. 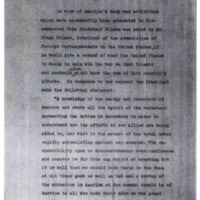