Address to the French Senate

Address to the French Senate

To the French Senate, Paris, France.

You have made me feel your welcome in words as generous as they are delightful, and I feel that you have paid me to-day a very unusual and distinguished honor. You have graciously called me your friend. May not I in turn call this company a company of my friends? For everything that you have so finely said to-day, sir, has been corroborated in every circumstance of our visit to this country. Everywhere we have been welcomed not only, but welcomed in the same spirit and with the same thought, until it has seemed as if the spirits of the two countries came together in an unusual and beautiful accord.

We know the long breeding of peril through which France has gone. France thought us remote in comprehension and sympathy, and I dare say there were times when we did not comprehend as you comprehended the danger in the presence of which the world stood. There was no time when we did not know of its existence, but there were times when we did not know how near it was. And I fully understand, sir, that throughout these trying years, when mankind has waited for the catastrophe, the anxiety of France must have been the deepest and most constant of all. For she did stand at the frontier of freedom. She had carved out her own fortunes through a long period of eager struggle. She had done great things in building up a great new France; and just across the border, separated from her only by a few fortifications and a little country whose neutrality it has turned out the enemy did not respect, lay the shadow cast by the cloud which enveloped Germany, the cloud of intrigue, the cloud of dark purpose, the cloud of sinister design. This shadow lay at the very borders of France. And yet it is fine to remember, sir, that for France this was not only a peril but a challenge. France did not tremble. France waited and got ready, and it is a fine thing that though France quietly and in her own way prepared her sons for the struggle that was coming, she never took the initiative or did a single thing that was aggressive. She had prepared herself for defense, not in order to impose her will upon other peoples. She had prepared herself that no other people might impose its will upon her.

As I stand with you and as I mix with the delightful people of this country I see this in their thoughts: “America always was our friend. Now she understands. Now she comprehends; and now she has come to bring us this message, that understanding she will always be ready to help.” And, while, as you say, sir, this danger may prove to be a continuing danger, while it is true that France will always be nearest this threat, if we can not turn it from a threat into a promise, there are many elements that ought to reassure France. There is a new world, not ahead of us, but around us. The whole world is awake, and it is awake to its community of interest. It knows that its dearest interests are involved in its standing together for a common purpose. It knows that the perils of France, if it continues, will be the peril of the world. It knows that not only France must organize against this peril, but that the world must organize against it.

So I see in these welcomes not only hospitality, not only kindness, not only hope, but purpose, a definite, clearly defined purpose that men, understanding one another, must now support one another, and that all the sons of freedom are under a common oath to see that freedom never suffers this danger again. That to my mind is the impressive element of this welcome. I know how much of it, sir, and I know how little of it, to appropriate to myself. I know that I have the very distinguished honor to represent a nation whose heart is in this business, and I am proud to speak for the people whom I represent. But I know that you honor me in a representative capacity, and that my words have validity only in proportion as they are the words of the people of the United States. I delight in this welcome, therefore, as if I had brought the people of the United States with me and they could see in your faces what I see—the tokens of welcome and affection.

The sum of the whole matter is that France has earned and has won the brotherhood of the world. She has stood at the chief post of danger, and the thoughts of mankind and her brothers everywhere, her brothers in freedom, turn to her and center upon her. If this be true, as I believe it to be, France is fortunate to have suffered. She is fortunate to have proved her mettle as one of the champions of liberty, and she has tied to herself once and for all all those who love freedom and truly believe in the progress and rights of man. 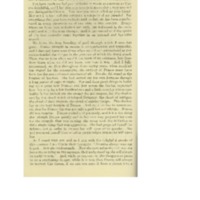