Address of President Wilson at Arlington

Address of President Wilson at Arlington

I have not come here to-day to deliver an address, but merely reverently to take part in expressing the sentiment of this impressive day. It is necessarily a day of reminiscences. Reminiscence is not always a profitable exercise. It generally belongs to those, appropriately to those only, who have left the active stage of life and have nothing to think about except the things that are gone and dead. It does not behoove a nation to walk with its eyes over its shoulder. Its business is constantly in the years that lie ahead of it and in the present that challenges it to the display of its power. But there are reminiscences which are stimulating and wholesome, and among those reminiscences are chiefly to be ranked the recollections of days of heroism, days when great nations found it possible to express the best that was in them by the ardent exercise of every power that was in them.

That is what gives dignity to a day like this. It is not a day of regret. It is not a day of weakening memory. It is a day of stimulation. But, my friends, these stimulating memories we are sometimes apt to minimize because we do not see the full significance of them. We are constantly speaking of the great war of which we think to-day as a war which saved the Union, and it did indeed save the Union, but it was a war that did a great deal more than that. It created in this country what had never existed before,—a national consciousness. It was not the salvation of the Union; it was the rebirth of the Union. It was the time when America for the first time realized its unity and saw the vision of its united destiny.

The solemn lesson of these memories for us is not that we must be ready to save the Union again, for there is none among us who threaten its life, but that we must see to it that the unity then realized, the vision then seen, is exemplified in us and in the things that we do. There is no stimulation in any lesson unless it be the stimulation to duty. There is no stimulation in any occasion if it be merely the pleasure of recollection; it must also be the ardor and courage of hope. Greater days lie before this nation than it has ever seen yet; and the solemn consciousness of those who bear office in this time is that they must make their best endeavor to embody in what they do and say and are, the best things in the United States.

It does not do to talk too much about one’s self, and I do not think that it is wholesome for the United States to talk too much about itself. I do not want to know what you are today so much as I want to know what you are going to do tomorrow. The only test I know of that is competent to determine what you are is the test of what you do. Let us not think of our characters; let us think of our duties and of the actions that lie before us. I have always maintained that the man who lives to cultivate his own character will result only in cultivating an intolerable prig, because his object will be himself. Character, my friends, is a by-product; it is produced in the great manufacture of daily duty. Duty is not easy to determine. Duty for a nation is made up of so many complicated elements that no man can determine it. No group of men without wide common counsel can possibly determine what the duty of the day is. That is the strength of a democracy, because there daily rises in the great body of a democracy the expression of an untrammeled opinion which seems to fill the air with its suggestions of duty; and those who stand at the head of affairs have it as their bounden obligation to endeavor to express in their own actions those things that seem to rise out of the conscience and hope and purpose of the great body of the people themselves.America, I have said, was reborn by the struggle of the Civil War, but America is reborn every day of her life by the purposes we form, the conceptions we entertain, the hopes that we cherish. We live in our visions. We live in the things that we see. We live, and hope abounds in us as we live, in the things that we purpose. Let us go away from this place renewed in our devotion to daily duty and to those ideals which keep a nation young, keep it noble, keep it rich in enterprise and achievement; make it to lead the nations of the world in those things that make for hope and for the benefit of mankind. 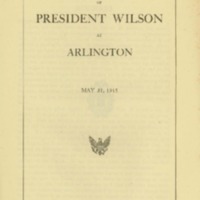