Mr. President and members of the American Medical Association, ladies and gentlemen, I feel it a privilege, as representing the State of New Jersey, to welcome this great society to its session this year in Atlantic City.

A great many people come to Atlantic City on all sorts of errands, most of them not serious. [Laughter.] The problems that Atlantic City is confronted by is that it is the refuge of the idle, and those who are idle are apt to adjourn the ordinary standards of their lives. [Laughter.] But you are doubly welcome here, because you have not come as idlers but as those who study the more serious problems of our lives, both individually and nationally.

Atlantic City is used now to investigation. [Laughter.] You have come as investigators, not to investigate Atlantic City, except for your intimate knowledge of the make-up, the physical make-up of all citizens of the community [laughter], and I feel in facing a great association like this that I am facing a body of men and women who have a particularly intimate connection with the life of the country, because you are very much more than physicians individually. You are very much more than the advisers of individuals with regard to the problems of health. You are the guardians of communities. You are the guardians of communities not only with regard to those general sanitary problems which are summed up under the head of sanitation and general hygiene, for example, but of a great many moral problems also. In our day the old story that the physical welfare of man is very closely knit with the moral is very true, and as a man thinks so is he, a thing which comes very much nearer being a physical fact than is usually realized, because there is undoubtedly an air of morale in most of the problems that you have to deal with. At any rate, by way of preliminary determination and as counselors or individuals, you are the arbiters, to some degree, of the life of communities.

I have sometimes wished there might be some way of establishing an official connection between doctors and the State that has been found in the case of lawyers. Lawyers are officers of the court, and are subject to discipline as such. They hold in their hands the honor of obeying and carrying out the laws of the Commonwealth, and they are held amenable on that basis. It is on that basis that men are dealt with for contempt of court and lawyers are held to a code which has nothing to do with their knowledge of the law. Similarly, it seems to me, the doctor, by reason of the license he holds, is reputed to represent morality as well as the knowledge of the community. [Applause.] And the most interesting part of the profession is this, that knowledge is not vital unless it goes hand in hand with honesty and sympathy. I believe you will agree with me that one of the things to be regretted in modern times is that we have been obliged to specialize our professions to so great a degree, because in proportion as the medical profession is specialized, for example, the old family physician disappears.

I remember going over in my memory a single year of my family life with my children when they were small and finding that I had called in consultation 13 different specialists. [Laughter.] There was no ill luck in the 13, because it all came out very happily. But where I had summoned 13 specialists my father would have summoned 1 family physician. My father would not have got as good advice as I got, and yet I lived through it. [Laughter and applause.] But every time he sent for his doctor he was sending for a personal friend. He was sending for a man who had his confidence in a peculiar degree. He was sending for a man who walked along the paths of life with him as a comrade and confidant. There was something very vital, there was something very useful in that relationship, and although we have certainly yielded only to necessity, it is unfortunate that we should have been obliged to specialize so much as we have, and therefore it is necessary, it seems to me, if you will permit me to suggest it, that we regeneralize our sympathies. I remember saying once, when I was following out a certain occupation, that I understood the chief business of the university was to make young men as unlike their fathers as possible. I will hasten to explain that as I did no that occasion. I did not then, nor do I say that now, in disrespect to the fathers, but merely this: By the time a man was old enough to have a son in the university he became so immersed in a special occupation and narrowed to the point of a single calling, it was advisable that his son should be taken out on some place of vantage where he could see the world, instead of seeing a single individual, a single community, a single profession. I understood that to be the business of the university to regeneralize each generation of youngsters, show them the Nation, show them the great infinite variety of human interests, show them the map of the world, so that they would never forget, at any rate, their general geographic relations to the races of mankind. So, it seems to me, every profession, particularly a profession so absorbed as yours is, and bent upon investigations, must find it necessary to refresh its general sympathies by reconnecting itself with the wider questions of our modern life.

As an American I feel that the task of a statesman in our day is analogous to the task of the surgeon. There is a great deal that is necessary to be cut out of modern life [laughter], and yet we must be very careful not to injure any of the sound tissue in cutting it out, and the various processes of politics are not unlike the processes with which you are familiar. The preliminary agitations of a political campaign are a sort of prognosis [laughter] and the platforms are a sort of diagnosis, and then follows the critical part. [Laughter.] Then you have to study your materia medica; then you have to propose a particular operation and determine exactly what you are going to do in following up your diagnosis to remove the disease, or, at any rate, to apply some tonic which will enable nature to assist herself. [Laughter.]

The moral of that sort of thing is that the surgeon should know what he is about, and that rough and ready methods, methods of passion, methods of prejudice, are of all things the most dangerous. [Applause.] They are the methods of the quack; they are the methods of the uneducated, the uninstructed, the unlicensed practitioner, and therefore I have a sort of sympathy with you. [Laughter.] It is very much easier for you to get at the difficulty and the particular phenomenon with which you have to deal than it is for the men who are wandering abroad amidst the general phenomena of society; and yet, it seems to me, that you can be infinitely instrumental in assisting the statesman, because there are a great many evidences and symptoms at this time of hysteria [laughter], and if you will only hurry home from this convention and calm your communities down we may be able to transact business. [Roars of laughter.]

I am very glad to have you all at once in New Jersey, but you can not calm New Jersey by merely sitting here in Atlantic City. It will be necessary for you to disperse to your homes and get to work on the people you know. I know a great many people whom I would like to get to work on [laughter] if I only knew the proper cure for hysteria, but never having, happily, felt the symptoms myself, I am unsympathetic about it. And yet, seriously, ladies and gentlemen, speaking of the problems of our life, they are all one. The thing I am particularly impatient with, ladies and gentlemen, is dividing our lives and our intersts into sections and supposing you know nothing about anything, except one thing. The whole problem of modern society is infinitely complicated, just because it is variously specialized, and it should be our object to avoid the separation of interests, but a body of unified interests, moving forward to the common goal of general service. That, it seems to me, is the problem of all intelligent men in the United States and in the world at large. I can not do better, therefore, than to ask you in your modern occupation to harmonize the various parts of our whole life to one another, so that heat, hostility, and friction may be taken out and all the sweet and wholesome processes of life may be restored. [Loud and prolonged applause.] 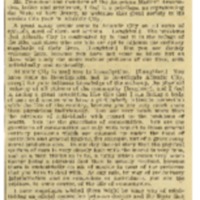