Mr. Superintendent, Young Gentlemen, Ladies and Gentlemen: During the greater part of my life I have been associated with young men, and on occasions it seems to me without number have faced bodies of youngsters going out to take part in the activities of the world, but I have a consciousness of a different significance in this occasion from that which I have felt on other similar occasions. When I have faced the graduating classes at universities I have felt that I was facing a great conjecture. They were going out into all sorts of pursuits and with every degree of preparation for the particular thing they were expecting to do; some without any preparation at all, for they did not know what they expected to do. But in facing you I am facing men who are trained for a special thing. You know what you are going to do, and you are under the eye of the whole Nation in doing it. For you, gentlemen, are to be part of the power of the Government of the United States. There is a very deep and solemn significance in that fact, and I am sure that every one of you feels it. The moral is perfectly obvious. Be ready and fit for anything that you have to do. And keep ready and fit. Do not grow slack. Do not suppose that your education is over because you have received your diplomas from the academy. Your education has just begun. Moreover, you are to have a very peculiar privilege which not many of your predecessors have had. You are yourselves going to become teachers. You are going to teach those 50,000 fellow countrymen of yours who are the enlisted men of the Navy. You are going to make them fitter to obey your orders and to serve the country. You are going to make them fitter to see what the orders mean in their outlook upon life and upon the service; and that is a great privilege, for out of you is going the energy and intelligence which are going to quicken the whole body of the United States Navy.

I congratulate you upon that prospect, but I want to ask you not to get the professional point of view. I would ask it of you if you were lawyers; I would ask it of you if you were merchants; I would ask it of you whatever you expected to be. Do not get the professional point of view. There is nothing narrower or more unserviceable than the professional point of view, to have the attitude toward life that it centers in your profession. It does not. Your profession is only one of the many activities which are meant to keep the world straight, and to keep the energy in its blood and in its muscle. We are all of us in this world, as I understand it, to set forward the affairs of the whole world, though we play a special part in that great function. The Navy goes all over the world, and I think it is to be congratulated upon having that sort of illustration of what the world is and what it contains; and inasmuch as you are going all over the world you ought to be the better able to see the relation that your country bears to the rest of the world.

It ought to be one of your thoughts all the time that you are sample Americans—not merely sample Navy men, not merely sample soldiers, but sample Americans—and that you have the point of view of America with regard to her Navy and her Army; that she is using them as the instruments of civilization, not as the instruments of aggression. The idea of America is to serve humanity, and every time you let the Stars and Stripes free to the wind you ought to realize that that is in itself a message that you are on an errand which other navies have sometimes forgotten; not an errand of conquest, but an errand of service. I always have the same thought when I look at the flag of the United States, for I know something of the history of the struggle of mankind for liberty. When I look at that flag it seems to me as if the white stripes were strips of parchment upon which are written the rights of man, and the red stripes the streams of blood by which those rights have been made good. Then in the little blue firmament in the corner have swung out the stars of the States of the American Union. So, it is, as it were, a sort of floating charter that has come down to us from Runnymede, when men said, “We will not have masters; we will be a people, and we will seek our own liberty.

”You are not serving a government, gentlemen; you are serving a people. For we who for the time being constitute the Government are merely instruments for a little while in the hands of a great Nation which chooses whom it will to carry out its decrees and who invariably rejects the man who forgets the ideals which it intended him to serve. So that I hope that wherever you go you will have a generous, comprehending love of the people you come into contact with, and will come back and tell us, if you can, what service the United States can render to the remotest parts of the world; tell us where you see men suffering; tell us where you think advice will lift them up; tell us where you think that the counsel of statesmen may better the fortunes of unfortunate men; always having it in mind that you are champions of what is right and fair all ’round for the public welfare, no matter where you are, and that it is that you are ready to fight for and not merely on the drop of a hat or upon some slight punctillio, but that you are champions of your fellow men, particularly of that great body one hundred million strong whom you represent in the United States.

What do you think is the most lasting impression that those boys down at Vera Cruz are going to leave? They have had to use some force—I pray God it may not be necessary for them to use any more—but do you think that the way they fought is going to be the most lasting impression? Have men not fought ever since the world began? Is there anything new in using force? The new things in the world are the things that are divorced from force. The things that show the moral compulsions of the human conscience, those are the things by which we have been building up civilization, not by force. And the lasting impression that those boys are going to leave is this, that they exercise self-control; that they are ready and diligent to make the place where they went fitter to live in than they found it; that they regarded other people’s rights; that they did not strut and bluster, but went quietly, like self-respecting gentlemen, about their legitimate work. And the people of Vera Cruz, who feared the Americans and despised the Americans, are going to get a very different taste in their mouths about the whole thing when the boys of the Navy and the Army come away. Is that not something to be proud of, that you know how to use force like men of conscience and like gentlemen, serving your fellow men and not trying to overcome them? Like that gallant gentleman who has so long borne the heats and perplexities and distresses of the situation in Vera Cruz—Admiral Fletcher. I mention him, because his service there has been longer and so much of the early perplexities fell upon him. I have been in almost daily communication with Admiral Fletcher, and I have tested his temper. I have tested his discretion. I know that he is a man with a touch of statesmanship about him, and he has grown bigger in my eye each day as I have read his dispatches, for he has sought always to serve the thing he was trying to do in the temper that we all recognize and love to believe is typically American.

I challenge you youngsters to go out with these conceptions, knowing that you are part of the Government and force of the United States and that men will judge us by you. I am not afraid of the verdict. I can not look in your faces and doubt what it will be, but I want you to take these great engines of force out onto the seas like adventurers enlisted for the elevation of the spirit of the human race. For that is the only distinction that America has. Other nations have been strong, other nations have piled wealth as high as the sky, but they have come into disgrace because they used their force and their wealth for the oppression of mankind and their own aggrandizement; and America will not bring glory to herself, but disgrace, by following the beaten paths of history. We must strike out upon new paths, and we must count upon you gentlemen to be the explorers who will carry this spirit and spread this message all over the seas and in every port of the civilized world.

You see, therefore, why I said that when I faced you I felt there was a special significance. I am not present on an occasion when you are about to scatter on various errands. You are all going on the same errand, and I like to feel bound with you in one common organization for the glory of America. And her glory goes deeper than all the tinsel, goes deeper than the sound of guns and the clash of sabers; it goes down to the very foundation of those things that have made the spirit of men free and happy and content. 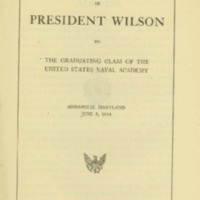