Mr. President, Gentlemen of the Associated Press, Ladies, and Gentlemen: I am deeply gratified by the generous reception you have accorded me. It makes me look back with a touch of regret to former occasions when I have stood in this place and enjoyed a greater liberty than is granted me to-day. There have been times when I stood in this spot and said what I really thought, and I can not help praying that those days of indulgence may be accorded me again. I have come here to-day, of course, somewhat restrained by a sense of responsibility which I can not escape. For I take the Associated Press very seriously. I know the enormous part that you play in the affairs not only of this country but of the world. You deal in the raw material of opinion and, if my convictions have any validity, opinion ultimately governs the world.

It is, therefore, of very serious things that I think as I face this body of men. I do not think of you, however, as members of the Associated Press. I do not think of you as men of different parties or of different racial derivations or of different religious denominations. I want to talk to you as to my fellow citizens of the United States, for there are serious things which as fellow citizens we ought to consider. The times behind us, gentlemen, have been difficult enough; the times before us are likely to be more difficult still, because, whatever may be said about the present condition of the world’s affairs, it is clear that they are drawing rapidly to a climax, and at the climax the test will come, not only for the nations engaged in the present colossal struggle—it will come to them, of course—but the test will come for us particularly.

Do you realize that, roughly speaking, we are the only great Nation at present disengaged? I am not speaking, of course, with disparagement of the greatness of those nations in Europe which are not parties to the present war, but I am thinking of their close neighborhood to it. I am thinking how their lives much more than ours touch the very heart and stuff of the business, whereas we have rolling between us and those bitter days across the water 3,000 miles of cool and silent ocean. Our atmosphere is not yet charged with those disturbing elements which must permeate every nation of Europe. Therefore, is it not likely that the nations of the world will some day turn to us for the cooler assessment of the elements engaged? I am not now thinking so preposterous a thought as that we should sit in judgment upon them—no nation is fit to sit in judgment upon any other nation—but that we shall some day have to assist in reconstructing the processes of peace. Our resources are untouched; we are more and more becoming by the force of circumstances the mediating Nation of the world in respect of its finance. We must make up our minds what are the best things to do and what are the best ways to do them. We must put our money, our energy, our enthusiasm, our sympathy into these things, and we must have our judgments prepared and our spirits chastened against the coming of that day.

So that I am not speaking in a selfish spirit when I say that our whole duty, for the present at any rate, is summed up in this motto, “America first.” Let us think of America before we think of Europe, in order that America may be fit to be Europe’s friend when the day of tested friendship comes. The test of friendship is not now sympathy with the one side or the other, but getting ready to help both sides when the struggle is over. The basis of neutrality, gentlemen, is not indifference; it is not self-interest. The basis of neutrality is sympathy for mankind. It is fairness, it is good will, at bottom. It is impartiality of spirit and of judgment. I wish that all of our fellow citizens could realize that. There is in some quarters a disposition to create distempers in this body politic. Men are even uttering slanders against the United States, as if to excite her. Men are saying that if we should go to war upon either side there would be a divided America—an abominable libel of ignorance! America is not all of it vocal just now. It is vocal in spots, but I, for one, have a complete and abiding faith in that great silent body of Americans who are not standing up and shouting and expressing their opinions just now, but are waiting to find out and support the duty of America. I am just as sure of their solidity and of their loyalty and of their unanimity, if we act justly, as I am that the history of this country has at every crisis and turning point illustrated this great lesson.

We can not afford, therefore, to let the rumors of irresponsible persons and origins get into the atmosphere of the United States. We are trustees for what I venture to say is the greatest heritage that any nation ever had, the love of justice and righteousness and human liberty. For, fundamentally, those are the things to which America is addicted and to which she is devoted. There are groups of selfish men in the United States, there are coteries, where sinister things are purposed, but the great heart of the American people is just as sound and true as it ever was. And it is a single heart; it is the heart of America. It is not a heart made up of sections selected out of other countries.

What I try to remind myself of every day when I am almost overcome by perplexities, what I try to remember, is what the people at home are thinking about. I try to put myself in the place of the man who does not know all the things that I know and ask myself what he would like the policy of this country to be. Not the talkative man, not the partisan man, not the man who remembers first that he is a Republican or a Democrat, or that his parents were German or English, but the man who remembers first that the whole destiny of modern affairs centers largely upon his being an American first of all. If I permitted myself to be a partisan in this present struggle, I would be unworthy to represent you. If I permitted myself to forget the people who are not partisans, I would be unworthy to be your spokesman. I am not sure that I am worthy to represent you, but I do claim this degree of worthiness—that before everything else I love America. 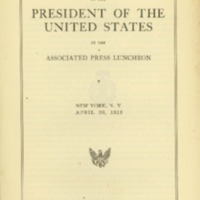