Mr. Chairman, Mrs. McLaurin Stevens, Ladies and Gentlemen: I assure you that I am profoundly aware of the solemn significance of the thing that has now taken place. The Daughters of the Confederacy have presented a memorial of their dead to the Government of the United States. I hope that you have noted the history of the conception of this idea. It was suggested by a President of the United States who had himself been a distinguished officer in the Union Army. It was authorized by an act of Congress of the United States. The corner stone of the monument was laid by a President of the United States elevated to his position by the votes of the party which had chiefly prided itself upon sustaining the war for the Union, and who, while Secretary of War, had himself given authority to erect it. And, now, it has fallen to my lot to accept in the name of the great Government, which I am privileged for the time to represent, this emblem of a reunited people. I am not so much happy as proud to participate in this capacity on such an occasion,—proud that I should represent such a people. Am I mistaken, ladies and gentlemen, in supposing that nothing of this sort could have occurred in anything but a democracy? The people of a democracy are not related to their rulers as subjects are related to a government. They are themselves the sovereign authority, and as they are neighbors of each other, quickened by the same influences and moved by the same motives, they can understand each other. They are shot through with some of the deepest and profoundest instincts of human sympathy. They choose their governments; they select their rulers; they live their own life, and they will not have that life disturbed and discolored by fraternal misunderstandings. I know that a reuniting of spirits like this can take place more quickly in our time than in any other because men are now united by an easier transmission of those influences which make up the foundations of peace and of mutual understanding, but no process can work these effects unless there is a conducting medium. The conducting medium in this instance is the united heart of a great people. I am not going to detain you by trying to repeat any of the eloquent thoughts which have moved us this afternoon, for I rejoice in the simplicity of the task which is assigned to me. My privilege is this, ladies and gentlemen: To declare this chapter in the history of the United States closed and ended, and I bid you turn with me with your faces to the future, quickened by the memories of the past, but with nothing to do with the contests of the past, knowing, as we have shed our blood upon opposite sides, we now face and admire one another. I do not know how many years ago it was that the Century Dictionary was published, but I remember one day in the Century Cyclopedia of Names I had occasion to turn to the name of Robert E. Lee, and I found him there in that book published in New York City simply described as a great American general. The generosity of our judgments did not begin to-day. The generosity of our judgment was made up soon after this great struggle was over. Men came and sat together again in the Congress and united in all the efforts of peace and of government, and our solemn duty is to see that each one of us is in his own consciousness and in his own conduct a replica of this great reunited people. It is our duty and our privilege to be like the country we represent and, speaking no word of malice, no word of criticism even, stand shoulder to shoulder to lift the burdens of mankind in the future and show the paths of freedom to all the world. 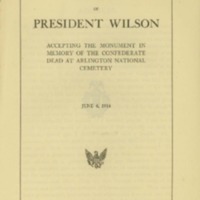