Woodrow Wilson addresses the Southern Commercial Congress about what the opening of the Panama Canal will mean for trade in the Southern States.

Your Excellency, Mr. Chairman: It is with unaffected pleasure that I find myself here to-day. I once before had the pleasure, in another southern city, of addressing the Southern Commercial Congress. I then spoke of what the future seemed to hold in store for this region, which so many of us love and toward the future of which we all look forward with so much confidence and hope. But another theme directed me here this time. I do not need to speak of the South. She has, perhaps, acquired the gift of speaking for herself. I come because I want to speak of our present and prospective relations with our neighbors to the south. I deemed it a public duty, as well as a personal pleasure, to be here to express for myself and for the Government I represent the welcome we all feel to those who represent the Latin American States.

The future, ladies and gentlemen, is going to be very different for this hemisphere from the past. These States lying to the south of us, which have always been our neighbors, will now be drawn closer to us by innumerable ties, and, I hope, chief of all, by the tie of a common understanding of each other. Interest does not tie nations together; it sometimes separates them. But sympathy and understanding does unite them, and I believe that by the new route that is just about to be opened, while we physically cut two continents asunder, we spiritually unite them. It is a spiritual union which we seek.

I wonder if you realize, I wonder if your imaginations have been filled with the significance of the tides of commerce. Your governor alluded in very fit and striking terms to the voyage of Columbus, but Columbus took his voyage under compulsion of circumstances. Constantinople had been captured by the Turks and all the routes of trade with the East had been suddenly closed. If there was not a way across the Atlantic to open those routes again, they were closed forever, and Columbus set out not to discover America, for he did not know that it existed, but to discover the eastern shores of Asia. He set sail for Cathay and stumbled upon America. With that change in the outlook of the world, what happened? England, that had been at the back of Europe with an unknown sea behind her, found that all things had turned as if upon a pivot and she was at the front of Europe; and since then all the tides of energy and enterprise that have issued out of Europe have seemed to be turned westward across the Atlantic. But you will notice that they have turned westward chiefly north of the Equator and that it is the northern half of the globe that has seemed to be filled with the media of intercourse and of sympathy and of common understanding.

Do you not see now what is about to happen? These great tides which have been running along parallels of latitude will now swing southward athwart parallels of latitude, and that opening gate at the Isthmus of Panama will open the world to a commerce that she has not known before, a commerce of intelligence, of thought and sympathy between North and South. The Latin American States, which, to their disadvantage, have been off the main lines, will now be on the main lines. I feel that these gentlemen honoring us with their presence to-day will presently find that some part, at any rate, of the center of gravity of the world has shifted. Do you realize that New York, for example, will be nearer the western coast of South America than she is now to the eastern coast of South America? Do you realize that a line drawn northward parallel with the greater part of the western coast of South America will run only about 150 miles west of New York? The great bulk of South America, if you will look at your globes (not at your Mercator’s projection), lies eastward of the continent of North America. You will realize that when you realize that the canal will run southeast, not southwest, and that when you get into the Pacific you will be farther east than you were when you left the Gulf of Mexico. These things are significant, therefore, of this, that we are closing one chapter in the history of the world and are opening another, of great, unimaginable significance.

There is one peculiarity about the history of the Latin American States which I am sure they are keenly aware of. You hear of “concessions” to foreign capitalists in Latin America. You do not hear of concessions to foreign capitalists in the United States. They are not granted concessions. They are invited to make investments. The work is ours, though they are welcome to invest in it. We do not ask them to supply the capital and do the work. It is an invitation, not a privilege; and States that are obliged, because their territory does not lie within the main field of modern enterprise and action, to grant concessions are in this condition, that foreign interests are apt to dominate their domestic affairs, a condition of affairs always dangerous and apt to become intolerable. What these States are going to see, therefore, is an emancipation from the subordination, which has been inevitable, to foreign enterprise and an assertion of the splendid character which, in spite of these difficulties, they have again and again been able to demonstrate. The dignity, the courage, the self-possession, the self-respect of the Latin American States, their achievements in the face of all these adverse circumstances, deserve nothing but the admiration and applause of the world. They have had harder bargains driven with them in the matter of loans than any other peoples in the world. Interest has been exacted of them that was not exacted of anybody else, because the risk was said to be greater; and then securities were taken that destroyed the risk—an admirable arrangement for those who were forcing the terms! I rejoice in nothing so much as in the prospect that they will now be emancipated from these conditions, and we ought to be the first to take part in assisting in that emancipation. I think some of these gentlemen have already had occasion to bear witness that the Department of State in recent months has tried to serve them in that wise. In the future they will draw closer and closer to us because of circumstances of which I wish to speak with moderation and, I hope, without indiscretion.

We must prove ourselves their friends and champions upon terms of equality and honor. You can not be friends upon any other terms than upon the terms of equality. You can not be friends at all except upon the terms of honor. We must show ourselves friends by comprehending their interest whether it squares with our own interest or not. It is a very perilous thing to determine the foreign policy of a nation in the terms of material interest. It not only is unfair to those with whom you are dealing, but it is degrading as regards your own actions.

Comprehension must be the soil in which shall grow all the fruits of friendship, and there is a reason and a compulsion lying behind all this which is dearer than anything else to the thoughtful men of America. I mean the development of constitutional liberty in the world. Human rights, national integrity, and opportunity as against material interests—that, ladies and gentlemen, is the issue which we now have to face. I want to take this occasion to say that the United States will never again seek one additional foot of territory by conquest. She will devote herself to showing that she knows how to make honorable and fruitful use of the territory she has, and she must regard it as one of the duties of friendship to see that from no quarter are material interests made superior to human liberty and national opportunity. I say this, not with a single thought that anyone will gainsay it, but merely to fix in our consciousness what our real relationship with the rest of America is. It is the relationship of a family of mankind devoted to the development of true constitutional liberty. We know that that is the soil out of which the best enterprise springs. We know that this is a cause which we are making in common with our neighbors, because we have had to make it for ourselves.

Reference has been made here to-day to some of the national problems which confront us as a nation. What is at the heart of all our national problems? It is that we have seen the hand of material interest sometimes about to close upon our dearest rights and possessions. We have seen material interests threaten constitutional freedom in the United States. Therefore we will now know how to sympathize with those in the rest of America who have to contend with such powers, not only within their borders but from outside their borders also.

I know what the response of the thought and heart of America will be to the program I have outlined, because America was created to realize a program like that. This is not America because it is rich. This is not America because it has set up for a great population great opportunities of material prosperity. America is a name which sounds in the ears of men everywhere as a synonym with individual opportunity because a synonym of individual liberty. I would rather belong to a poor nation that was free than to a rich nation that had ceased to be in love with liberty. But we shall not be poor if we love liberty, because the nation that loves liberty truly sets every man free to do his best and be his best, and that means the release of all the splendid energies of a great people who think for themselves. A nation of employees can not be free any more than a nation of employers can be.

In emphasizing the points which must unite us in sympathy and in spiritual interest with the Latin American peoples we are only emphasizing the points of our own life, and we should prove ourselves untrue to our own traditions if we proved ourselves untrue friends to them. Do not think, therefore, gentlemen, that the questions of the day are mere questions of policy and diplomacy. They are shot through with the principles of life. We dare not turn from the principle that morality and not expediency is the thing that must guide us and that we will never condone iniquity because it is most convenient to do so. It seems to me that this is a day of infinite hope, of confidence in a future greater than the past has been, for I am fain to believe that in spite of all the things that we wish to correct the nineteenth century that now lies behind us has brought us a long stage toward the time when, slowly ascending the tedious climb that leads to the final uplands, we shall get our ultimate view of the duties of mankind. We have breasted a considerable part of that climb and shall presently—it may be in a generation or two—come out upon those great heights where there shines unobstructed the light of the justice of God. 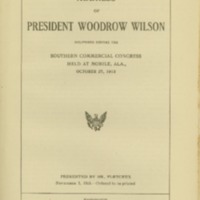