Monsieur Dumont, Mayor of Dijon, received Monday a delegation of American organizations, who presented to him, in testimony of the cordiality and sympathy existing between the people of Dijon and the Americans, a beautiful portrait of President Woodrow Wilson, together with the following letter:

«To his Honor,
»Monsieur Charles Dumont,
»Mayor City of Dijon.»

The American Military Organizations that have located in France are grateful to your people for the splendid spirit with wich you have welcomed them. We appreciate the trying circumstances through wich you have passed, and therefore more appreciate your hospitality and generosity. The Americans of this section are happy to know that the citizens of Côte-d’Or and the City of Dijon are so interested in our comfort.

»We wish to express to the Mayor of Dijon and Civil Authorities as well as to the Military Circle, the sentiment and spirit that prompted our coming among you.

»Our desire to enter the war and resist the hand of organized tyranny which was rampant in Central Europe had been slowly growing until our proclamation of war was presented to the American Congress in April 1917. We could well observe that tyranny was first trying to destroy the neighboring countries and if successful, would carry its reign of terror to America, and destroy our system of popular freedom.

»We wish to express to the Mayor, Military Circle, and people of Dijon, in something more than words, our gratitude for the pleasant welcome and reception, given in our behalf. We, therefore, present you with the photograph of a person who directly opposes Prussianism and tyranny, and who represents the spirit of individual freedom and a world’s democracy. He was the author of the American proclamation against Hunnism; he is the Commander-in-Chief of the American Armies and Navy. This, Honored Sir, is the portrait of Woodrow Wilson, President of the United States, and a friend to France. This photograph is meager in itself, but it represents the spirit of the man who presents to the world our position in this war.

»I trust you may accept it as an emblem of our feeling. That it may act as a stumulant for a world’s freedom in your councils, and that it may never be passed to the hands of that army of

«Vicious Scientific Cowards» who are now attempting to destroy the art and freedom of civilization.

The Mayor, deeply moved by this proceeding, thanked Major McLean in the name of the City of Dijon.

He declared that the beautiful portrait of President Wilson, which he had just received as a testimony of the cordial relations and the harmony existing between the two races, would occupy in future a place of honor in the Hôtel de Ville, beside that of the President of the French Republic

The Mayor reminded Major McLean that France was a peaceful nation — she had proved it by accepting during forty-five years, the continual vexations and humiliations of Germany — and if she took up armes in 1914, it was because she had a respect for treaties and believed in the defense of justice and violated rights. America, after ripe reflection, and having weighed the events and the facts, has joined with us to repulse our aggressors and to free us from their incessant menace, which was threatening the Liberty of the world.

He does not doubt but that we will emerge soon victorious from this frightful struggle, and united in a peace happily not far distant, we will continue to work together for the economic development of our two countries, for the greatest good ol our sister democracies. 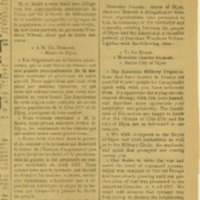