Extracts from a letter from Lord Northcliffe, August 25, 17.

"Our people are evidently very agitated about this most delicate and difficult question of the British ships now building here. The Censor is wisely stopping reference to it in the English newspapers, but that it will be raised in Parliament is very obvious. That it will create a very bad impression in Europe is equally obvious. Is there not some possible compromise?

This morning, among a number of communications that I received is one from Mr. Balfour in which he says that he presented to Mr. Page a letter, dated August 16th, a copy of which I enclose.

My instructions are to point out that my Government will keenly feel the blow, which will be a very serious one to England, if these ships are taken over by your Government. In the belief that the ships would not be transferred, public statements have been made by the Prime Minister in which these ships have been included in his estimates of British tonnage.

My Government places itself entirely in the hands of the President." 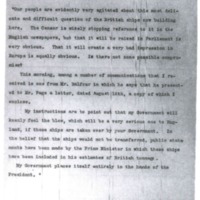