Richard Dabney writes that the war must be fought to the finish, not to a peace without victory, but to a peace that truly makes the world safer and ends Prussianism and its despotism.

By PROFESSOR R. H. DABNEY, Of the University of Virginia.

To the Editor of The New York Times:
The pacifists calling themselves the "People's Council," with headquarters at 2 West Thirteenth Street, New York, are distributing copies of a speech made by Dr. JL Magnes at the Garden Theatre on May 30. A copy was sent to me with the request that I express my opinion of the views contained therein; but, with your permission, Mr. Editor, I prefer to express it through the medium of THE TIMES rather than in a private letter to the "People's Council."

With the general aspiration of Dr. Magnes for permanent world peace every reasonable man can sympathize. But if the United States and her allies follow his advice as to the method of securing peace, the only kind of peace they will get is the kind that the lamb gets when he occupies the interior of the wolf. Dr. Magnes simply "adjures" President Wilson "to reaffirm his belief in a peace without victory, and unequivocally to throw in the lot of the American democracy with that of Russia and bring a speedy, universal, democratic peace to the world." He also quotes Kerensky as indorsing on April 24 the "peace without victory" notion. But Kerensky, like our President, has gotten bravely over that delusion. He has seen the Russian army in Galicia suddenly give ear to the babble of pacifism and, abandoning the fruits of Korniloff's splendid victories, turn tail and seek peace through skedaddling. What a glorious thing it would be if Pershing's Sammies, Haig's Tommies, and Petain's Poilus should become imbued with Dr. Magnes's horror of victory and should rapidly sprint for the tall timber! How the Prussian wolf would lick his chops!


Having studied for three years in Germany, (three semesters under Heinrich von Treitschke,) I think I know something of the Prussian wolf, and something, therefore, of the futility of peaceprattle until that beast of prey lies prone in the dust. War in the abstract is a curse, and peace in the abstract is a blessing. But, then, war in the abstract and peace in the abstract are nothing but abstractions. What we are really concerned with now is a concrete situation a situation in which the most powerfully organized gang of political criminals in the world's history are deliberately attempting, after disciplining, drilling, and deluding the German masses, to conquer the human race. Knowing what we now know, the man who puts the smallest faith in any promises of the Prussian Government proves himself gullible indeed. There is one way, and one way alone, to rid the world of the fear of Prussian dominationand that way is to crush Prussian power. When Dr. Magnes says that "we know how futile all wars are," he betrays a truly ludicrous ignorance of history. If he had said that all wars were wicked, we might merely think that he had a very tender heart and weakish nerves. But when he says that all wars are "futile," or, in other words, that no war accomplishes anything, we can only say that, if sincere, he is profoundly ignorant.

How "futile," for example, was the war of the American Revolution? Some people are under the impression that it resulted in the birth of this great, free nation. How "futile," again, was the struggle of the free Greek cities against the despotism of Darius and Xerxes? After the battle of Salamis, you remember, the Athenians began to rebuild their destroyed city, and Mardonius, the Persian General, offered to rebuild it for them if they would make a separate peace and an alliance with Persia. "Tell Mardonius," said they to the Persian envoy, "that so long as the sun holds on his way in Heaven, the Athenians will come to no terms with Xerxes." The Spartans had been much alarmed at the prospect of a separate Athenian peace with Persia, but the Athenians not only made the above answer to Mardonius, but stood firm even after the Spartans, on a religious pretext, had failed to come to their aid, and after Mardonius, again occupying their city, had forced them to take refuge in the Island of Salamis. Once more the wily Persian offered them the same terms; but that keenwitted as well as heroic people saw through the trick. They were not to be lured into betraying the cause of their allies, the cause of general freedom, and, ultimately, their own cause, by the honeyed word "peace." Only a single member of the Athenian Council was either silly or base enough to propose that the Persian offer should even be laid before the people; and that lone pacifist was forthwith stoned to death by the populace for daring to imagine that they might purchase peace at the price of dishonor. Once more Mardonius laid Athens in ashes and Attica waste. But, the next year saw the battle of Plataea, the annihilation of the Persian army, and the final triumph of Greek freedom. War, not peace; courage, not cowardice; heroic vision, not pacifistic blindness, had made the Greek world "safe for democracy." Peace came at last, not "peace without victory," but peace with victory overwhelming victory for freedom over despotism, for the allied republics of Greece over the "Great King" of the huge Oriental empire. Was that one of the "futile" wars referred to by Dr. Magnes? Unquestionably there have been futile wars; but unquestionably, also, many wars have been futile because ended by premature treaties of peace. The politico-religious war that broke out in Germany after Luther's death, e.G., was largely futile because, instead of being fought to a finish, it was ended by that most fatuous and futile peace, the "Religious Peace," of Augsburg in 1555. In the womb of that product of sixteenthcentury pacifism was concealed the embryo of the most infernal struggle of modern times the Thirty Years' War.

Let us turn a deaf ear to the vaporings of Dr. Magnes and the selfstyled "People's Council." We have embarked upon a war of selfdefense, a war for the eternal principles of right and freedom. That war must not end in a hollow, patchedup, pacifistic truce. No holier war was ever waged, and it must be fought to a finish, the finish of Prussianism and its arrogant attempt to grind the world beneath its heel. 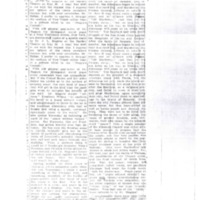